Dunnet Beach Clean - Can You Spare an Hour

Dunnet Forestry Trust Bids To Take Ownership Of The Forest

A Letter sent to members of the Dunnet Forestry Trust IMPORTANT NEWS - PROPOSAL FOR COMMUNITY OWNERSHIP OF DUNNET FOREST March 2019 Dear Member, Dunnet Forestry Trust has launched a proposal to take ownership of Dunnet Forest on behalf of the community.  Currently the forest is owned by Scottish Natural Heritage and leased to the Trust.
[Community Groups]
23/3/2019

Big crowds turned out to see the fun day at the Caithness Science Festival 2019.   The science festival has grown each year since its inception 17 years ago.
[Community Groups]
22/3/2019

Mapping Thurso - Asking the Community What Needs to Be Improved

Thurso Development Officer, Joan Lawrie has been running a series of community consultation since taking up post with Caithness Voluntary Group under the Scottish Government funded Aspiring Communities programme in January.  Joan has been speaking to users of Ormlie Community Association, Caithness Citizen's Advice Bureau, Thurso Community Cafe and speaking to various groups existing in the town.
[Community Groups]
21/3/2019

Old St.  Peter's Kirk Preservation Association and Historic Environment Scotland are teaming up to hold a two day workshop on how to survey and formally record the graveyard and gravestones.
[Community Groups]
21/3/2019

First published in the Caithness Field Club Bulletin 2010 Vol 7 No 6.   The following extracts from the War Diary of the late Henrietta Munro of Thurso come from the North Highland Archive and are published with their permission.
[Community Groups]
16/3/2019

This article was first published in the Caithness Field Club Bulletin 2010 Vol 7 No 6.   Early in the 20th century, Italian-owned cafes, ice cream parlours and chip shops spread through- out Scotland, run by enterprising immigrants, who saw Scotland as a land of opportunity, at a time when work was scarce in their own country.
[Community Groups]
15/3/2019

A popular resource for pregnant women and their families has been updated to include the latest information on perinatal mental health support.   A refreshed edition of Scotland's ‘Ready Steady Baby' publication was launched today by Minister for Public Health Joe FitzPatrick.
[Community Groups]
28/2/2019

See poster for a number of events from the Ranger service..
[Community Groups]
28/2/2019 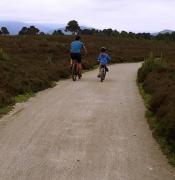 With spring around the corner we will be looking forward to some nice weather and more daylight to enable us to get outside more.   There is more and more evidence that making more use of local green spaces and natural places can help guard against and manage key health issues such as depression, coronary heart disease, stroke, type 2 diabetes, obesity and dementia.
[Medical Services]
26/2/2019

With respect to the new hospital at Aviemore Dr Boyd Peters said "We have been on this journey since 2012 and the land purchase is a significant step towards securing much needed modern healthcare facilities for the population of Badenoch and Strathspey" After seven years it finally reaches the planning stage so that must mean yet another two or even three years until its on the ground and working.   In Caithness redesign of health services has been going on and on for several years and recently we have the early stages of a "hub" idea being promoted.
[Community Groups]
23/2/2019

For anyone wondering what they are like: Basically we walk, stop, look, discuss the scenery and history of the things we are looking at, walk on a bit, stop for lunch, eat some homemade biscuits (these are also free), walk on again, repeat.  These are not aimed at stomping along the cliffs trying to break records and we walk as fast as the slowest (or most scenery fixated) walker.
[Medical Services]
22/2/2019

Highlands and Islands Labour MSP Rhoda Grant has raised with the First Minister why the air ambulance was not initially called when a Caithness mother went into labour at 30 weeks with twins.   At First Minister's Questions today, Mrs Grant told Nicola Sturgeon the woman had bravely shared her experience of giving birth under the current maternity provisions in Caithness.
[Community Groups]
21/2/2019

Dunbeath Strath Walk With The Rangers

Enjoy a gorgeous spring-time walk up the Dunbeath Strath.   Follow the river through the hazel & birch woods and up onto Cnoc na Maranaich to take in amazing views.
[Community Groups]
20/2/2019

Events - The Physics of Mountaineering Mon 4th March, Norseman Hotel Wick, 7pm.Alison McLure from the Institute of Physics talks about the science behind mountain safety and mountain rescue.  Tea and coffee and chat to Dr McLure after.