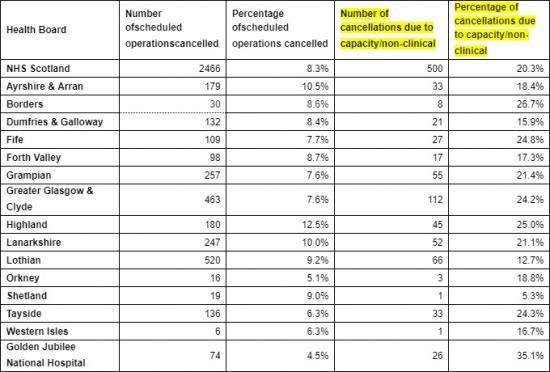 Operations had to be cancelled across NHS Highland because hospitals simply could not cope, new figures reveal.

Data published by ISD Scotland shows that 45 operations were cancelled in May 2019 due to non-clinical reasons such as not having enough staff or unclean equipment.

Across Scotland, 500 planned operations were cancelled in May 2019 because hospitals could not cope.

Scottish Labour say the figures show our NHS is simply not getting enough resources from the SNP government.

Scottish Labour MSP, and Shadow Health Secretary David Stewart said: "Behind each of these figures is a patient waiting in pain for treatment that hospitals have not been able to give.

"We have seen a staffing crisis develop in our health service, with huge unfilled gaps for consultants, nurses and midwives.

"Patients across NHS Highland are being let down by the SNP government and are not getting the care they deserve.

"Scottish Labour say it is time to use the powers of the Scottish Parliament to properly fund our NHS."

On Friday 18th October four of the CHAT's team visited the new Balfour Hospital in Kirkwall, Orkney.   The main purpose of the visit was partly to see then hospital but in particular how maternity services work there.
[Medical Services]
20/6/2019