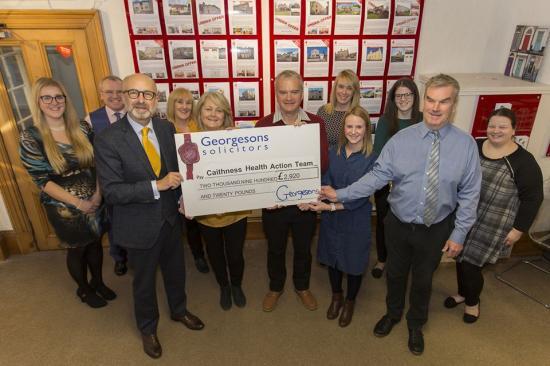 When Bruce de Wert of Georgesons Solicitors heard of the distress of new Mums having to drive back from Inverness with their newborn in danger, he knew he had to do something.

The problem is that newborns cannot sit in car seats without compressing their lungs and it is a long way from Inverness to Caithness!

And, so, he announced that this year the charity for Wills Week would be CHAT who provide lie flat car seats for for newborn babies.

During the week the firm raised £2920 by working for nothing whilst the clients who made Wills contributed to the charity.

He said: - "We had a fabulous response. People were very excited at the thought of helping newborn children and so were we! This is one of the best responses we have had."

Bill Fernie the chairman of Caithness Health Action Team (CHAT) said:-"Such a generous donation from Georgesons is very much appreciated. And not just for the scale of it but because it shows strong local support for our volunteers. They are, always, looking for ways to highlight issues relating to mothers, babies and families in Caithness".

He also said: - “We feel it is important at a time when there are so many cuts in public services that we can hold the right people to account and we will continue hard to try and represent those to all the relevant bodies and politicians."

Caithness Health Action Team along with the League of Friends for Caithness General hospital wanted to help patients and staff in our local Caithness hospitals.   We contacted NHSH and agreed that providing high quality Samsung tablets ,with protective wipe able covers would be an excellent way to help ,especially as at the moment there is currently no visiting allowed due to the pandemic.
[Medical Services]
20/10/2019