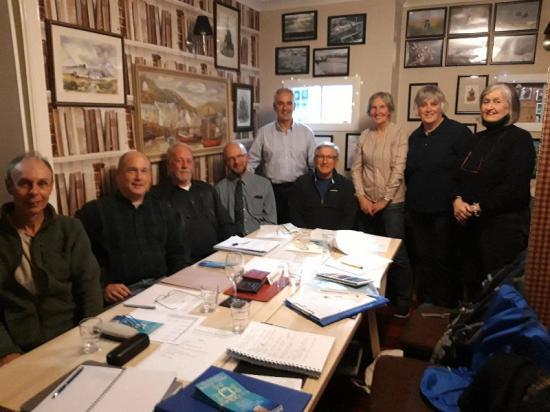 Trustees of the The John O Groats Trail and members of the steering group for the Northern Pilgrims' Way had a joint meeting on the 24th October at the Bannockburn Inn, Helmsdale. The main item for discussion was how they could co-operate to further the aims of both groups. The Northern Pilgrims' Way is a fairly new group who are working to re-establish the ancient pilgrimage route between St Duthac's, Tain and St Magnus Cathedral, Kikwall. As parts of the pilgrimage route overlap with the JOGT,which follows the coast from Inverness to John O Groats, it seemed sensible for both groups to work together. The NPW will benefit from the greater experience and higher profile of the more-established JOGT and the JOGT will benefit from the added historical interest in the places on their route and, hopefully, an increase in the numbers of people walking the route.

For the moment, the co-operation will take the form of having a presence at each other's meetings, sharing information and joint projects to improve the accessibility of the routes.

Long distance walks, and pilgrimage walks in particular, are increasing in popularity and it is hoped that these two projects will both encourage more visitors to the North of Scotland and give existing visitors a reason to spend even more time in the area.

The John o' Groats Trail had 126 long-distance walkers so far in 2019 and many times that number of local walkers.  Trail use has more than doubled each of the last three years and walkers have been using local accommodation, restaurants, and shops in increasing numbers.  One shopkeeper noted "We have more trail users in here than NC500 drivers."  Founded in May 2016, the Friends of the John o' Groats Trail is a registered Scottish charity.

The steering group for the Northern Pilgrims' Way have been working together since April of this year, following a meeting organised by the Scottish Pilgrim Routes Forum. They are a constituted, not-for-profit group. The JOGT is a registered charity, under the name of the Association of Northern Trails, Scotland. Both groups have members drawn from across the Far North and would welcome more members to get involved with their projects. They can be contacted via the the John o' Groats Trail website at jogt.org.uk and northernsaints@yahoo.com respectively.

All but the last three are trustees of the JOGT. Karl Rosie is also the chairman of the Northern Pilgrims' Way.

Alison Smith is the treasurer and Jane Coll is the secretary of the Northern Pilgrims' Way.