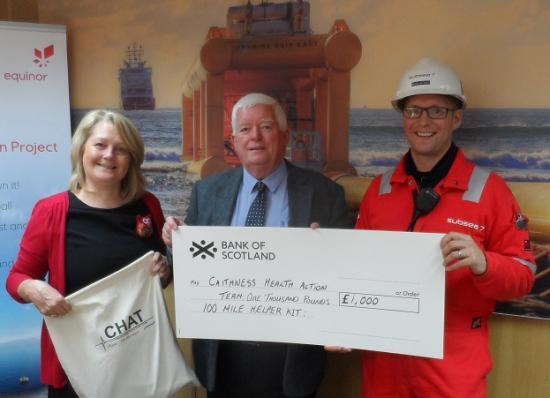 Mikie Aitken , Quality Control Inspector for Subsea7 Wester Site ,recently won a thousand pounds for a safety award while working on the Equinor Snorre project to be given to a charity of his choice.

He chose to donate to Caithness Health Action Team 100mile helper kits which are given to Caithness General Hospital , Community Maternity Unit who give the kits to local women that have to be quickly transferred to Raigmore maternity hospital in an emergency situation. The kit has essentials a mother needs such as sanitary products, toiletries, water, energy bars, head rest, key for the disabled toilet, baby blanket and nappies.

Mikie and his wife Sarah recently made use of one of these 100 mile helper kits when they were transferred by ambulance 100 miles to Raigmore where their baby boy Harrison was born a month premature. He explained,‘The kit was really useful as we arrived in Raigmore with nothing due to the hasty speed of the transfer.

This award was in relation to Subsea 7 striving to keep a safe working environment which ensures that their employees remain safe for their families.This donation will go towards a project that also helps our families in Caithness'.

Mikie is seen handing the cheque to Bill Fernie Chairperson of Caithness Health Action Team and Mikie's mum Maria who is the secretary.

Operations had to be cancelled across NHS Highland because hospitals simply could not cope, new figures reveal.   Data published by ISD Scotland shows that 45 operations were cancelled in May 2019 due to non-clinical reasons such as not having enough staff or unclean equipment.
[Medical Services]
2/5/2019