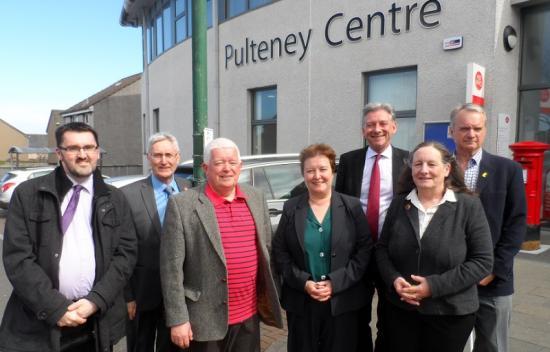 A visit of the Labour Party Leader in Scotland Richard Leonard MSP accompanied by Rhoda Grant MSP heard from the third sector and Caithness Health Action Team (CHAT) about problems arising to the community from changes to health provision and wide range of topics.

Roger Saxon the local Labour party organiser and Alan Tait from Caithness Voluntary Group facilitated the meeting at the Pulteney Centre in Wick.

Bill Fernie CHAT chairman and Ron Gunn, CHAR vice-chairman set out some of the problems for people in the county in respect of health issues while Catherine Patterson spoke about Befrienders and the need for assistance.

lain Gregory of Caithness CAB set out some of the problems faced by particularly low income families in the community and agreed with CHAT regarding travel to Raigmore for health problems. Arising from the conversations with the Labour Leader Richard Leonard was the fact that some people do not take up appointments for Raigmore sure to distance and cost. This is another hidden area of deprivations for some people in the far north. Ian Gregory regularly writes in the John O'Groat Journal and has column blog on the local CAB web site

The Labour Leader now joins a growing number of politicians being told about the problems in the north faced by long distance travel for services.

Ron Gunn, Bill Fernie and Maria Aitken from CHAT also visited the meeting of the annual review of NHS Highland last week andmade several points on maternity and other issues facing people in the north.

Caithness Citizens Advice Bureau has announced it will be available by telephone and email offering its services to local people to help them through the Coronavirus period.  Isobel Mackay CAB Manager Caithness said today,"We understand that local people are concerned about the health impacts of this virus and will also need advice about other aspects of their lives, including their jobs, rent and social security payments.  So we are determined to remain available and ready to offer people all the help we can.
[Medical Services]
20/11/2019

Mikie Aitken , Quality Control Inspector for Subsea7 Wester Site ,recently won a thousand pounds for a safety award while working on the Equinor Snorre project to be given to a charity of his choice.   He chose to donate to Caithness Health Action Team 100mile helper kits which are given to Caithness General Hospital , Community Maternity Unit who give the kits to local women that have to be quickly transferred to Raigmore maternity hospital in an emergency situation.
[]
1/5/2019