The annual display of Christmas Trees at St Fergus church, Wick by community groups has grown to its largest yet.   Several groups had people on hand to explain what their groups do and what a huge variety there was even though there are many more groups out there.
[Churches]
9/10/2017 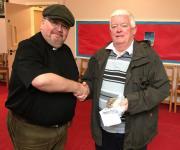 The ladies of St Fergus church rallied round to help Caithness Health Action Team (CHAT) with yet another fund raiser.   Each year they choose a cause to support either abroad or local This year they decide to help CHAT in their efforts to stop continued reduction in local health services by NHS Highland.
[Churches]
20/4/2014

The Church of Jesus Christ of Latter-Day Saints in Thurso has received a fibre glass replica of a historical stone, which will be displayed on Saturday, 26 April from 1-5pm during free tours of the new Thurso meeting house.   The stone was originally part of a building in Stirling, where its inscription, ‘What E’er Thou Art, Act Well Thy Part,’ inspired a young man named David Oman McKay as he struggled with homesickness.
[Churches]
1/3/2014

Barbara Haywood chuckles as she remembers one particularly memorable Sunday.   Members of her church were meeting in the Thurso Youth Center, which also was a hostel at the time.
[Churches]
14/12/2013

Wick St Fergus held their first Christmas Tree Festival on Saturday 14th December 2013, and invited Charities and other groups to come along to the Church and decorate a tree and showcase their activities.   Usual stalls, Christmas flowers, music and a sales table were on show with tea, coffee and cakes and mince pies on offer to warm before venturing out again to the high gales on Saturday.