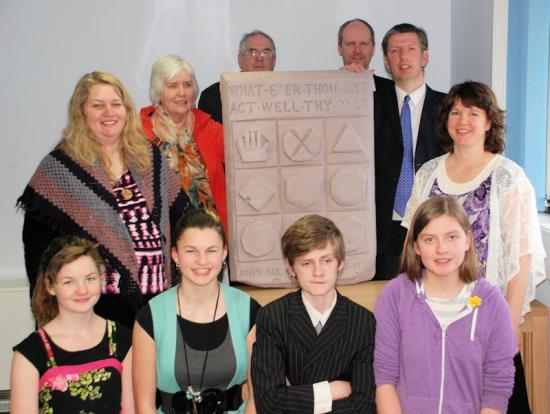 The Church of Jesus Christ of Latter-Day Saints in Thurso has received a fibre glass replica of a historical stone, which will be displayed on Saturday, 26 April from 1-5pm during free tours of the new Thurso meeting house.

The stone was originally part of a building in Stirling, where its inscription, ‘What E’er Thou Art, Act Well Thy Part,’ inspired a young man named David Oman McKay as he struggled with homesickness. His grandparents, Helen Oman and William McKay, lived in a croft they had built near Thurso and emigrated to America after joining the church in 1850. A hundred years later, their grandson became the President of the world-wide church, leading it for 19 years. Under his presidency, the church nearly tripled in size, from 1.1 million to 2.8 million members.

President McKay often told the story of this stone, and how it inspired him through a difficult time. The building in Stirling was demolished in 1965, but the stone was preserved and placed on display in Utah. There is a second replica of the stone on display in Edinburgh.

Saturday’s tour also includes a hand-made miniature of William McKay’s croft, along with other items from church history in the Thurso area.

Saturday evening 7.30pm will see a special time capsule buried in the garden to mark the event and a musical celebration with adult, youth and children’s choirs participating.

Sunday Morning meetings start 10am and will see the Dedication of the building by the Church leader of Scotland and Ireland.

Barbara Haywood chuckles as she remembers one particularly memorable Sunday.   Members of her church were meeting in the Thurso Youth Center, which also was a hostel at the time.