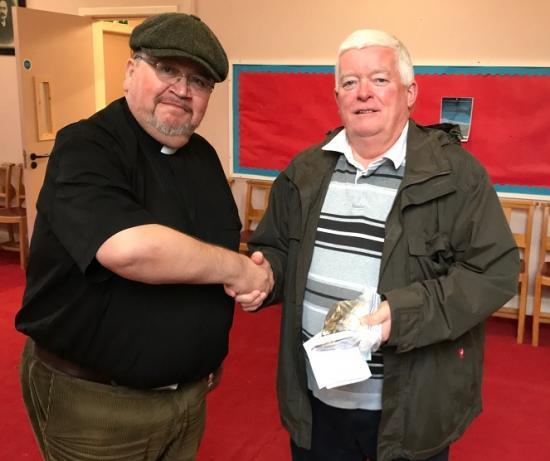 Bill Fernie, chairman of Caithness Health Action Team (CHAT) thanked the ladies who organised the display and accepted the money on behalf of CHAT. Bill said,"The generosity of Caithness people has been truly amazing and they are rallying round the campaign to fight cuts to health services in the north."

Bill spent the day at the display in St Fergus church and spoke to many of the people who attended to see the dresses and look at the many wedding photos.

Bill had many conversations bringing people up to date with what CHAT was doing and a getting a few more postcards signed to send to the First Minister. Bill said,"It was a really interesting day and I heard about the problems people were encountering with travel to the south to keep health appointments. I heard about giving birth from several generations of ladies and how they viewed the current changes in maternity services and none were happy about it. From ladies who had their children recently to grandmothers and great grand mothers there was a huge dismay in they way Caithness was being treated."

"As you might expect for a display of wedding dresses it was mainly ladies who attended but men and women alike expressed support for CHAT. A few even recalled the campaigns of the past like the North Action Group 12 years ago and the MUMS campaign before that,"

"All in all it was great o hear how support for CHAT was still growing with latest fears about Dunbar hospital in Thurso and Town and county In Wick being to the forefront."

"NHS Highland, and politicians of all levels were mentioned as people asked what were they doing about it. I pointed to our demonstrations in Thurso and Wick on 28th October. Several politicians from various parties have agreed to speak including our own local MSP"

On Friday 18th October four of the CHAT's team visited the new Balfour Hospital in Kirkwall, Orkney.   The main purpose of the visit was partly to see then hospital but in particular how maternity services work there.
[Churches]
22/7/2019

HUNDREDS of photographs of Wick life spanning more than half a century are to go on show during the town's gala week.   They will form an exhibition called The McDonald Collection being held at the St Fergus Church Hall for one day only on Wednesday, 31st July 2019.
[Medical Services]
3/7/2019

A popular resource for pregnant women and their families has been updated to include the latest information on perinatal mental health support.   A refreshed edition of Scotland's ‘Ready Steady Baby' publication was launched today by Minister for Public Health Joe FitzPatrick.