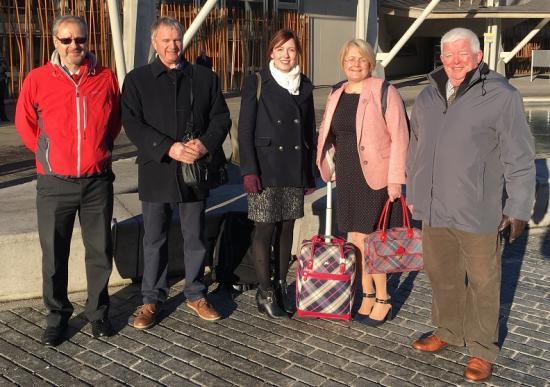 Five members of CHAT formed the delegation to meet with the health minister Shona Robison on Wednesday 7th February 2018.

The team from CHAT each took different elements of health concerns in Caithness to present to those present. Much to the surprise to CHAT the meeting had grown somewhat. The minister had invited a few others to listen including all the Highland MSP's (only Rhoda Grant and Gail Ross were actually present with Edward Mountain left feeling it had been orchestrated to keep him out as he had to chair a major committee meeting that morning. Also present were David Alston chairman of NHS Highland and Elaine Mead the Chief executive of NHS Highland.

The CHAT team and topics were -

The presentations took about 40 minutes to deliver and there was virtually no discussion at that point as Bill had asked that this wait until the end as the meting was scheduled to last only 45 minutes. In the end it last longer.

The delivery from the CHAT team was forceful and backed up by facts and information. The scene was set form the outset by Bill Fernie asking that the minister suspend the board in the light of information to be revealed and handed over. CHAT had begun to place the presentations on their Facebook page with Maria Aitken's presentation is already on. Ron Gunn and Iain Baikie's will follow over the next few days and finally next week the maternity arguments will be put online with some very revealing and shocking items on maternity unknown to CHAT or the wider public until now.

Following the meeting the minister agreed to speak to the CHAT team in private and 10 minutes extended to half an hour.

To comment or bring more cases to the attention of CHAT go to the CHAT Facebook page.

CHAT is building the media campaign and keeps in close contact with other groups fighting health cuts in their areas. Do let them know if you know of others in Scotland.