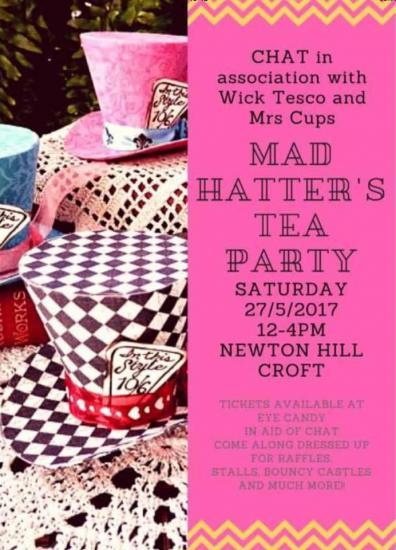 Delighted to confirm a very exciting line-up for our Mad Hatter's Tea Party at the end of this month....

* Afternoon tea of sandwiches, scones and cakes catered by the fabulous Mrs Cups and sponsored by Tesco Wick.

* The tea party will be fancy dress (optional) and there will be prizes for the best costumes.

* 10 stalls selling local produce, crafts and gifts (full list will be announced next week) plus CHAT stall with all proceeds going to our charity.

All in the gorgeous surroundings of Newton croft, and hosted by a very special Mad Hatter....

Please come along for a fun family day out! To answer a common question, we need to control numbers so this event is tickets only, and you can buy them from Eye Candy in Wick and in Thurso. All proceeds go to CHAT and will be used to help us in our campaigning and health improvement work.

Nearly half the tickets gone already, so get them early to avoid disappointment!

See more about CHAT at https://www.facebook.com/caithnesshealth/