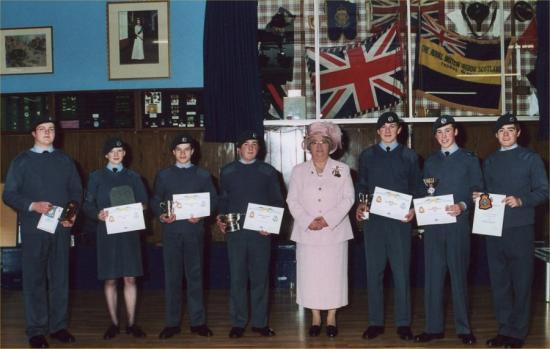 Miss Anne Dunnett, Lord Lieutenant of Caithness, was inspecting officer at the Thurso Air Cadet’s Annual Parent’s Night and Presentation of Awards in the Royal British Legion Thurso at the end of April. In addressing the cadets, Miss Dunnett highlighted their high standard of turnout and emphasised that, by being part of an organisation such as the Air Cadets, they were all youngsters who were doing something to make a difference in their lives.

Flight Lieutenant Fiona Macintosh, Commanding Officer of the Thurso Squadron, reviewed the year, highlighting the number of camps and adventure training activities that the Squadron has taken part, the success of bring Air Experience Gliding to Wick Airport and the achievement of Flight Sergeant David Struthers in completing his gliding scholarship and achieving his solo wings.

The cadets gave a drill demonstration and Corporal Nadia Gray and Cadet Keith Baxter gave a bagpipe recital, demonstrating some of the skills they learned during the Army Cadet Piping Camp earlier in the year.

The following awards were made by the Lord Lieutenant:

Action and Adventure For Young People Aged 12.5 to 17

If you're a fan of aviation, action and adventure, love sports and getting to know people then you're in the right place.   Every year nearly 56,000 air cadets and volunteer staff take part in exciting events all over the country.
[Air Training Corps]
30/5/2006

Flying Start to the New Year

Local Air Cadets, Sergeant David Struthers from Thurso and Corporal Christopher Bremner from Wick had a flying start to the year when they attended RAF Kinloss for their Gliding Scholarships.   They arrived at Kinloss early on the 2nd January, and spent a week learning all the knowledge and skills required to successfully complete the course.
[Air Training Corps]
2/7/2004

Cadets from the 1769 (THURSO) Squadron Air Cadets have been flying high over the last few weeks with great success in Athletics.   Seven cadets, representing their Squadron against the rest of Highland Wing achieved 9 Gold and 3 Silver medals.
[Air Training Corps]
15/7/2004

Eleven cadets and 3 members of staff from the Thurso Squadron travelled over 1000 miles to attend an Adventure Training Camp in Staffordshire.   The green camp was held at the Anzio Army Training Base in Leek and was organised by the 1406 (SPALDING) Sqn.
[Air Training Corps]
20/11/2003

Young Castletown man, Stuart Craigie, has successfully completed his RAF basic training and he now moves on to 12 month trade training at RAF Cosford for his role as a propulsion engineer.  He will then partake in on-the-job training at an operational base and he hopes this will be servicing the Nimrod aircraft, possibly at RAF Kinloss.