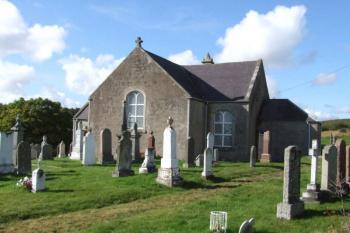 Since the formation of the Berriedale Church and Cemetery Association several events have been undertaken to ensure its continual usage and it also aims to continue with the restoration of this classic 19th century Telford building and also to highlight the cultural heritage of this special village.

The church is available for weddings, talks, musical events and exhibitions.

History
In c 530 on old maps of Scotland, there is evidence of a church at Berriedale. The village is written as Baridal or Bardual,with the indication relating to Saint Finbar and this name possibly given by his associated monks in his honour. From 166 to 1220 a series of chapels has been noted.

Following the appointment of Bishop Darrus as Bishop of Caithness in 1066, the first Catholic chapels were erected where there was some habitation, and in the parish of Latheron these were Clyth, Latheron, Dunbeath and Berriedale. Four separate Chapels are noted in the Berriedale area. One at Berriedale itself, another on the Berriedale Strath, one on Langwell Strath and one at Braemore.

One is called Braeheglish (Church on the Hill) and is sited on the Langwell Strath, linked by an ancient track known as the Priests Walk. The priests walked from one chapel to another over the moors and along the streams and rivers. The burn on the west side of Scaraben flowing into the Langwell Water/River? is called Angel's Burn after an incident where a priest allegedly met an angel. It was not until after the Reformation that the Presbyterian form of government and worship took effect and in 1699 a General Assembly was able to constitute a Presbytery in the county with three ministers serving the population. From 1760 the Missionaries of the Royal Bounty Committee conducted services in the preaching stations of Achreny, Halsary and Halladale. In 1794 Alexander Sage was the first missionary appointed to Achreny and his duties included services at Berriedale, Bruan and Achreny.

During the 18th century individual elders played an important role in fostering spiritual life and interest in the church and were called 'The Men'. One such belonging to the Berriedale district was John Sutherland or John Badbea. He was born in Ousdale in 1795 and for forty years he was an outstanding speaker at the Friday meetings all over the parish.

In 1806 the Rev John MacDonald, otherwise known as the Apostle of the North, was ordained as missionary to Berriedale. In 1807 he was called to the Gaelic Chapel in Edinburgh and later to St Kilda, and was famous all over the Highlands for his superb oratory and influence in the Disruption of 1843. Some of his sermons during the Cholera Epidemic are of particular significance. He was followed by the Rev George Davidson, then the Rev Archibald Cook and Rev Donald Sage, who was later to become minister at Reay.

In 1823 the Commissioners of Parliament had commissioned Thomas Telford, Civil Engineer, to undertake the construction of 31 Highland churches and 42 manses throughout Scotland. Following the granting of suitable land by James Horne, proprietor of Welbeck Estate, the Church with its distinctive bell tower and manse was completed in 1826 by William Davidson at a price of Ł1473.18s.1d. for the church.

On the outside wall facing south are two plaques.

One states 'Erected by the Commissioners of Parliament 1826' and the other 'On the application of James Horne of Langwell who granted all the required accommodations of lands. Gratis 1826'.

The first minister of this church was the Rev D. MacLachlan and in 1833 Berriedale was raised to the status of a Quod Sacra Parish.

Ministers were Rev Samuel Campbell, 1837;Rev Gilbert MacMillan, 1850; Rev Hugh Fraser, 1862; Rev Alexander Stewart, 1870; Rev Daniel MacDougall, 1876; Rev James Grieve, 1904; Rev W. Caird Taylor,1917 and Rev A. Scott Berrie, 1927. Following his retrial in 1950, the two congregations of Berriedale and Dunbeath were united under the old name of Berriedale-Dunbeath Church and the Rev A.F. Andrew was inducted as the first minister of the new united charge. He was succeeded by Rev James Whitton in 1956.

The last service before the church closed was held on 1st October 2006.
See http://www.caithness.org/fpb/2006/october/gallery.php?gallery=0

Without doubt the least known of all Telford's feats of construction was the design and erection of what has come to be known as the Parliamentary Churches. Bracegirdle and Miles in their lavishly illustrated book dismiss the church building in a sentence while in Rolt's biography one paragraph serves to cover the subject. It is only when you get back to Gibbs' 'Story of Telford' that a complete list of the churches is published.

The term 'Parliamentary Churches' arose from the fact that after the programme of highland roads and bridges had been completed the Government, in an attempt to atone for their past neglect of the Highlands and Islands set up a Commission in 1823 under Rickman to erect 43 additional churches in some of the most thinly populated and scattered parishes. The project was backed by a Government grant of Ł50,000 and this was to include a manse with each church. As Telford was architect and engineer to various previous parliamentary commissions he was asked to supply the plans and specifications - each church and manse to cost not more than Ł1,500. This financial restraint meant that the design would have to be simple and austere. Telford decided that more economy could be obtained by building all the churches to the same plan - he got the contract and this he proceeded to do. This was not however his first effort in the field of mass production. Throughout all his road and bridge construction work he only employed two designs of toll-house, the hexagonal and the rectangular, with a front porch.

The layout of each church was a simple T-plan. There were two doors and windows in the front wall, which if the terrain allowed, faced south. This was the longest wall of the building being 52' 6". On the left-hand gable there was a small belfry consisting of four plain pillars supporting a pyramidial top; the bell rope came down the outside of the gable. At each side of the building there were two windows, one in the end and one on each side of the rear wing. The exterior was plain and undecorated while the interior was equally austere with the pulpit against the front wall between the front windows and hexagonal in shape. Only six of the churches had a gallery.

At the end of the programme only 32 churches were eventually built, 19 in the Highlands and 13 in the Islands. In addition 11 existing churches were renovated. The ministers, who were paid by the Government, received Ł 120 per annum. On completion of the work in 1830 the total cost was Ł 54,422.

16 of the Highland churches are still standing. The three which have now gone were at Shieldaig, North Ballachulist and Lochgilphead. The existing buildings are at Tomintoul, Duror, Acharacle, Strontian, Ardgour, Plockton, Poolewe, Ullapool, Stoer. Kinlochluichart, Strath Conon, Kinlochberview, Strathy, Keiss, Berriedale and Croick (near Ardgay). This latter church is in almost original condition, unaltered but a little dilapidated, although a fund has now been set up to restore it. It has become famous because of its association with the Highland Clearances. There are messages and names scratched on the east window by people evicted from Glencalvie who were denied shelter in the church and bivouacked in the graveyard for some days before finding some other accommodation.

Berriedale Church has had one of its front doors closed up and a porch built on to the other. This is the only church which carries a date - a stone plaque over the door states "On the application of James Horne of Langwell, who granted all the required Accommodations Lands etc Gratis 1826", and on the south wall "Erected by Commissioners of Parliament in 1826".

At Keiss one doorway has been filled in and a weathervane set on top of the belfry while at Strathy the two front doors have been replaced by 2 small windows and the building is now a dwelling house. Thus this little known aspect of Telford's work fulfilled a vital need in the remote parts of the Highlands and Islands and acts as a living monument to this great Scot.

See more of the Berriedale area at -
http://www.caithness.org/atoz/berriedale/