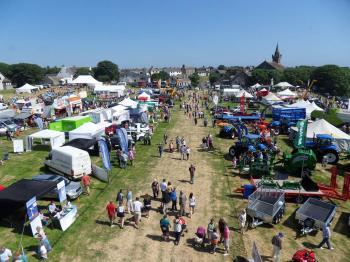 The Caithness Agricultural Society was founded in 1830 and became limited in 2006. The Society hold the annual Caithness County Show in July every year. This event promotes, for the benefit of the public, agriculturure and rural industries in Caithness. This is done by showcasing the best of the livestock produced in the county, trade stands and also the Northern Quality Produce Marquee, which promotes foods, drink and crafts from within the north of Scotland. Visitors and exhibitors attend the show from all over Scotland. The organisiation covers all ages and ethnicities. There are no barriers to becoming a member of the organisation.

Where are we?
The showfield alternates each year between the Riverside and Westerseat Grounds, Wick to Thurso East, Thurso.

PHOTO
From the 2013 Caithness County Show at Westerseat Farm by Wick.

The rain stayed off for most of the day.   Welly boots were in evidence to get around the show ground..
[Agriculture]
19/7/2014