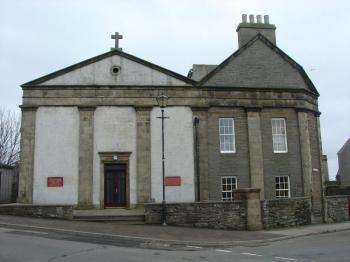 History of St. Joachim's
The church building was completed in 1836 on land that was given to Rev. Mister Walter Lovi in gratitude for his work among the cholera victims in 1832. Despite the positive feelings towards Rev. Lovi himself, large iron gates protected the entrance to the building from assaults by people who were still very anti-catholic.
The Rev. Lovi was from Keith in Banffshire and stayed in Wick during the six week herring fishing season. This pattern of occupation continued with a succession of priests using the church only when the fishermen, fish gutters & packers, salt merchants and barrel makers were in town. In 1861, Dr. Stephan de Djun Kooskoy, Synod Prefect of the Arctic Regions was serving mass in Wick. He had "promised God to give to the first Chapel I have for the benediction, the name of St. Joachim, the father of the Blessed Virgin" adding that "St. Joachim's Day is also most convenient for Wick as it falls during the fishing season".
Despite the seasonal nature of the congregation & the local opposition to the establishment of a Catholic church, the history of St. Joachim's is full of optimism. In 1868 the building of a school was started adjoining the church. It was completed the following year but never used for its intended purpose and the Belgian Order of nuns mooted for residency never arrived. The first resident priest arrived in 1872, travelling to Thurso three times a year to also say Mass there.
In the early part of the twentieth century a combination of lack of Catholics & lack of priests led to the town being served from elsewhere. The influx of RAF personnel during the second world war led to an upturn in numbers which again dwindled after 1945. The coming of the Dounreay Experimental Reactor Establishment in 1955 led to an upturn in the population of Caithness and with it a larger, more stable congregation.
The protection of the large iron gates at the church entrance was no longer felt to be necessary and they were removed as part of a church renovation in 1971. Just over 100 years after it was first mooted, three Sisters from La Sainte Union arrived in Wick to help with the pastoral care in the parish, taking up residence in 'Amherst' the building adjoining the church. The nuns also ran a nursery school in Amherst.
The congregation today is going from strength to strength and we would love to see or hear from you whether you are living in Caithness, visiting or have some connection with the area.
[This history is an abstract from "The story of St. Joachim's, Wick, 1836 - 1986 by M Baikie, available as a 20 page A5 booklet at UK Ł0.50 from the back of the church.]