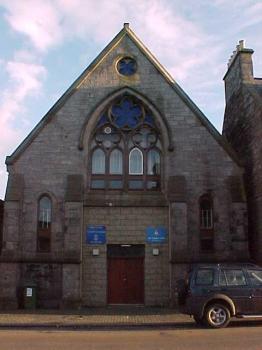 1 Highlanders Army Cadet Force has approximately 600 cadets, 31 Officers and 88 adult volunteers in 31 detachments over the Highlands and Islands, all under the one cap badge of the Royal Regiment of Scotland backed with the distinctive blue hackle.

The 31 detachments are organised into five companies.

Caithness Company has its Headquarters in the ACF Centre, Princes Street in Thurso. There are 5 detachments within the company covering Caithness and Sutherland area.

All detachments within the Battalion parade between 1900 and 2130 hours on one evening a week.

The army Cadets carried out a map reading weekend on the 14th and 15th January.  All the Cadets worked hard, and found some of the problems not only of navigating, but also simply moving, at night.
[Army Cadet Force]
27/7/2005

Another successful summer camp was attended by members of the Caithness Army Cadet Force at Altcar near Liverpool.   The young folk were accompanied by adult leaders from Caithness.
[Army Cadet Force]
19/6/2005

The photographs show C/Sgt Macdonald, Sgt Perry, Cpl Sutherland and L/Cpl Napier.   They are seen at Forsinain climbing up through the forest towards the county march, on the third day of their Duke of Edinburgh gold award expedition..
[Army Cadet Force]
16/5/2005

The spring is always a busy time for the Army Cadets.   During the run up to their summer camp they take part in events as varied as shooting matches, sports meetings, D of E expeditions and cadet skills competitions.
[Army Cadet Force]
7/3/2005

We have in our archive a few older photographs of the Army Cadet Force in Caithness.   First is linked above.