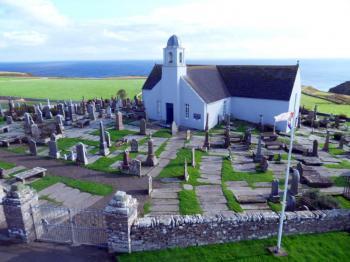 The remains of Castle Gunn, the original seat of the chief's of the Clan, and of Halberry Castle, the later stronghold, are situated on the Caithness coast seven miles north of the Heritage Centre. Neil Gunn's "Highland River", which was the basis for a number of his works, is at Dunbeath four miles south.

Among 77 septs traditionally associated with the Gunns are the Hendersons, Johnsons, MacWilliams, Mansons, Robsons, Robinsons, Thomsons, Williamsons, Wilsons and Wyllies. Is your family name related to our clan? Why not come along to the Clan Gunn Heritage Centre and find out?

Recently, evidence has turned up which indicates that Christopher Columbus was. after all, just an also ran, that he came a not very close second; and an increasing body of research is showing that credit for the discovery of America should really go to a Scot. Why not come to the Clan Gunn Heritage Centre and Museum at Latheron, in Caithness and see the evidence for yourself? Perhaps you can throw some light, for instance, on the 600-year-old portrait of a Scottish knight, marked out in stone, on a quiet roadside in Massachusetts

How did he get there? After all, America was still undiscovered by Europeans at the time and a further 94 years was to pass before Columbus could arrive. and what about the evidence on the knight's shield?
What was the connection between a tribe of wild Indians and an order of powerful Scottish knights and what about the grave in a chapel near Edinburgh and the architecture of a strange round tower in Newport, Rhode Island?