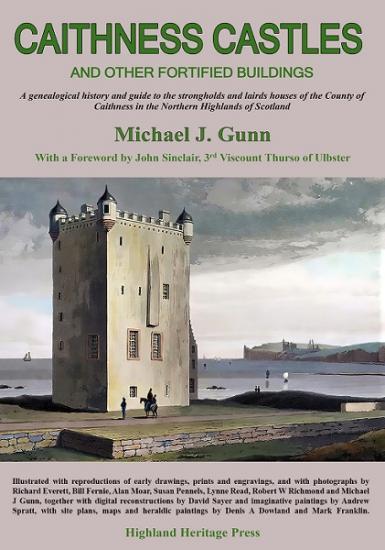 A Genealogical History and Guide to the Strongholds and Lairds Houses of the County of Caithness in the Northern Highlands of Scotland by Michael J Gunn.

This book recounts the histories and family connections of more than one hundred Caithness strongholds. Documenting the growth and development of fortified buildings in Caithness, commencing with the Iron and Bronze Age hill forts and brochs, through the Viking and Norse strongholds, to the medieval castles and the later lairds' houses.

The stories are often bloody and cruel: including a bishop roasted to death on his own fire, a massacre in a chapel, a mistress murdered, and her body buried in the castle, a beautiful young girl abducted on her wedding day, carried off and raped, and throwing herself from the battlements, a rebellious son starved to death by his own father.

There are stories of sieges, night-time assaults, and towers burnt down; of clan feuds, great raids and the carrying off of cattle, sheep and women. There are accounts of small towers built in remote places as bases for hunting the great herds of red deer which still roam the wilder parts of Caithness today. Of cliff-top fortresses with secret passages leading down to the sea, of deliberate shipwreck on the treacherous rocks of the Caithness coast, and of a secret room in a castle used by a coiner to flood the northern Highlands of Scotland with counterfeit money.

Superbly illustrated with numerous reproductions of early drawings, prints, engravings, and old photographs, many showing the castles and houses in their heyday. In addition many new photographs have been specially commissioned including close-up shots of details of
windows, doorways, entrances and construction techniques. This inclusion of early and recent images serves to illustrate the changes which have occurred to the various buildings over the centuries. Site maps and plans are also included together with suggested tour routes allowing visitors to plan convenient excursions which take in several strongholds in a day.

Published in a Limited edition of 150 copies, Case bound, signed and numbered.

The book, which extends to 261 pages, is richly illustrated with 239 images, including old engravings, early photographs, specially commissioned maps and photographs, and plans of the fortresses.

Published in March 2022 and orders now being taken.

To reserve your copy send an email now to highlandheritagepress@gmail.com
List price: GB£45.50 plus Post and Packing.