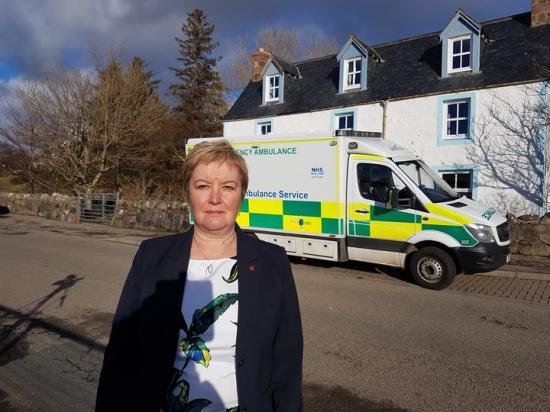 I spoke at the Scottish Parliament today in support of a petition submitted by Caithness Health Campaign group CHAT.

Maria Aitken's petition appeared before the Public Petitions Committee and called on "the Scottish Parliament to urge the Scottish Government to ask all relevant health boards to review their maternity model to ensure that it meets the needs of remote and rural communities".

The committee heard that the decision to change the status of Caithness maternity unit from an obstetric unit to a midwife unit in 2016 was made on the basis of safety. Mothers and/or babies who are assessed as needing obstetric or neonatal care are transferred to Raigmore Hospital.

It is a really important petition and I urged the committee to take it seriously. I have been involved over several years in trying to find a solution to pregnant women from Caithness travelling more than 100 miles to Raigmore Hospital to give birth.

In Feb 2019 I raised at First Minister's Questions the ‘horrendous circumstances' of a mother whose twins were born 50 miles apart after a dash to Raigmore Hospital and the stress that also caused the staff involved.

The committee unanimously agreed to get back to the Scottish Government to ask what progress had been made on several initiatives which were looking at solutions for rural areas.

Initiatives include a Best Start North Steering Group, established under the direction of NHS Highland and NHS Grampian Chief Executives, to oversee and steer a review of maternity and neonatal services across NHS Shetland, NHS Orkney, NHS Highland and NHS Grampian and which seeks to understand the resources, constraints, challenges and opportunities in the current systems.

I have been asking so many questions about this over the years and, yet, have not seen any solutions forthcoming, including the need for a full risk assessment for transfer journeys to Raigmore.
Of course, I realise that Covid-19 has seen some initiatives stalled but the Scottish Government really need to get on with this.

I've been told that the air ambulance helicopter is ‘a highly unsuitable environment for the delivery of a baby' and that means for any woman in labour and needing emergency help going by road ambulance is really the only option and air transfer is almost a non-starter.

Emergency aircrafts should be large enough to carry medical equipment and be able take at least one qualified medic on board, particularly to cater for women in labour.

The ScotSTAR service, run by the Scottish Ambulance Service and used to fly in medical experts in emergencies to locations, does not have obstetric/midwifery staff and I have asked if that expertise can be added to its remit.

Calling on the Scottish Parliament to urge the Scottish Government to ask all relevant health boards to review their maternity model to ensure that it meets the needs of remote and rural communities.

A centralisation of maternity services may work in urban areas, however, in remote and rural Scotland, centralising these services means asking expectant mothers to travel considerable distances while heavily pregnant, on potentially dangerous roads, to have their babies. In travelling so far to labour, they have to contend with being—

away from their other children and their support network;

in a busy hospital which is the only place that they can access the care that they need;

possibly being induced as, given the distances involved and controlling bed numbers, induction is being used regularly.

subject to high risk and very uncomfortable transfers either in private car or in the back of an ambulance for several hours).

This is all on top of all the normal stress at an already anxious time. Even if all goes as smoothly as possible, these mothers still face the prospect of a considerable journey home with their new born.

In NHS Highland, the decision was made in November 2016 that the obstetric maternity model was ‘unsafe' and that the maternity service at Caithness General Hospital in Wick was to be downgraded to a Community Midwifery Unit service. As a result, expectant mothers in Caithness who require more assistance than can be delivered by a Community Midwifery Unit service, must now go to the maternity unit at Raigmore hospital in Inverness, which is more than 100 miles away. This has led to 90% of expectant Caithness mothers delivering at Raigmore. In almost one year, 2019, 152 out of 161 births were delivered in Inverness. As mentioned above, induction is common. Of those 152 births, 83 were induced in Inverness. Another impact of centralisation are high levels of elective (33) and emergency (32) sections and a reduction in breastfeeding rates for Caithness women.

The decision to downgrade the maternity services was based on a report by Professor Van Woerden (2016), the then Director of Public Health and Policy, NHS Highland. We believe that the report focussed wholly on the negatives of the Obstetric led maternity model and failed to consider the possible detrimental impact on mothers, babies and families' perinatal mental health and well-being of—

Loneliness, separation anxiety and being scared.
Frightened of travelling such long distances while heavily pregnant, on what can be very difficult roads
Anxiety and stress caused by high induction rate
Stress and poverty
Distress of no privacy and lack of appropriate pain relief during labour in the centralised maternity unit.
Anxiety about travelling so far with a new-born, particularly as parents and carers are warned of the ‘dangers of babies sleeping in car seats for more than 30 minutes at a time for both pre- term and full-term babies'.
Anxiety about what will happen in an emergency if in labour
Communities feeling of vulnerability due to unsure risks involved in labour and pregnancy and very long distance to nearest Obstetric help.
New mothers who have had to travel to give birth have told us that ‘it was not the birth that traumatised them, it was the hospital environment' with some stating ‘they will never have another child after their experience’.

With one in five mums and one in ten partners in Scotland experiencing mental health problems during pregnancy and after birth (NSPCC, 2019) we believe that the centralisation of maternity deliveries place those living in remote or rural areas at a much greater risk due to the stresses outlined above.

We therefore ask that the Scottish Government places a duty on NHS Health Boards to not only assess the safety in decisions relating to maternity in remote and rural Scotland, but to also ensure that they fully consider the many issues that may impact on perinatal mental health for the mother, partner, unborn babies, children, families and fragile communities when making decisions affecting maternity provision.