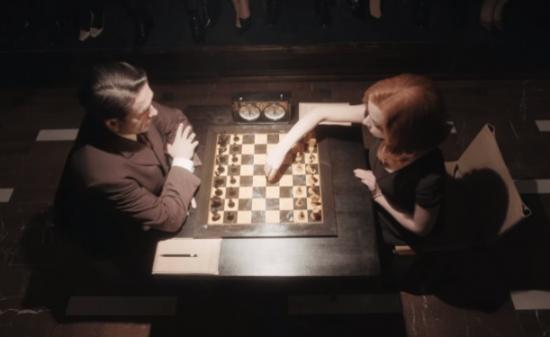 Whether you are a chess player or not the movie has been a huge hit on Netflix.

Now on the huge chess web site Chess.com an article shows all the chess positions from the movie.

Pedor Pinhata outlines all the references for chess players. And even if you are not a chess player but just curious to see the amount of details the makers of the film went into then take a look.
------------------------------------------
There's no doubt about it: "The Queen's Gambit" is a huge hit. With incredible performances by the actors, beautiful sets, and a well-constructed plot, it's no wonder the miniseries is so successful. With 68 million households watching the show in the first 28 days after its release, it's obvious you don't need to be a chess player to love it.

However, as a chess enthusiast myself, I have to admit I do think chess players enjoy the show on a higher level.

See the article and all the Queens Gambit chess HERE

If you want to learn chess or play at any level from novice to the top players join Chess.com

You can also find may live games being played on Twitch.tv where streamers are online playing games and taking challenges from all comers.