This National Adoption Week, A Couple Who Could Not Be Happier After Adopting Siblings Are Urging Other People To Consider Welcoming Vulnerable Children Into Their Family. 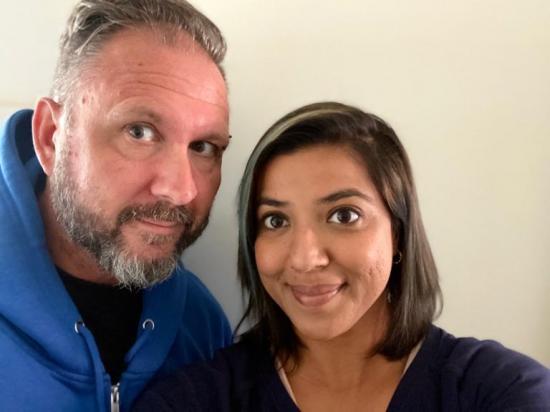 Feyaza Khan and Robert Hillier's home is filled with the hustle and bustle of busy family life and their two children are happy and thriving since being adopted by the couple. Feyaza and Robert, who adopted through Barnardo's, are sharing their story in support of National Adoption Week, which begins today (October 12th), and on-going national adoption campaign ‘You Can Adopt'.

Alongside Barnardo's, Feyaza and Robert are encouraging anyone who thinks they could offer a vulnerable child or siblings a forever family, to get in touch, saying adopting their children has "changed all of our lives for the better, forever."

A year after Feyaza Khan and Robert Hillier got married, they decided they were ready to become parents. After researching adoption agencies, they decided to reach out to Barnardo's.

Robert, 48, said: "We came across Barnardo's when we were doing an online search for adoption agencies. We didn't realise they dealt with adoption but it was a name we recognised which made us feel more confident.

"Their training over three days was fantastic and we were impressed by everyone we met. They were amazing. They made the time for us, they really did care."

Feyaza, 37, said: "We originally thought we would start with adopting one child and then maybe adopt another to grow our family over time, but the training was eye-opening - we had no idea how awful the situations were for some children. We really didn't have a clue. We wondered if we could offer more help and realised we had an opportunity to intervene and make a difference."

After being approved as adopters and undergoing the process to "match" them with their children, the couple were introduced to the siblings for the first time at their then foster carer’s home.

Feyaza said: "The first time we went to the foster carer’s house we were really nervous. It was a nerve-wracking experience. We got there early and just sat in the car, hardly speaking.

"When we knocked on the door we saw two curious little faces pressed up against the window. We went inside and the foster carer asked the children if they knew who we were - they said ‘yes, it’s mummy and daddy’. It felt very surreal."

Further visits followed, gradually becoming longer in duration and including trips to the park and other attractions, before everyone agreed the children were ready to move into their new home.

There have been some challenges along the way since the children came home, but Feyaza and Robert are adamant that the joy, love and laughter their children bring into their lives is the biggest reward they could wish for.

Robert said: "When I look at them now, compared to how they were before, I’m so proud - not only proud of the children, but also proud of us as new parents. Of course it’s not all daisy-chains and rainbows. There was lots of frustrated behaviour in the early days, but we’ve been blown away by how much they’ve changed.

“They had zero aspirations but now their confidence has grown and they’re absolutely amazing. They just needed someone to give them the opportunities to believe in themselves, with lots of cuddles, lots of love and lots of reassurance. They are multi-talented and their hopes and dreams have grown since coming home. They’re free to think about being children and just being."

Feyaza added: “Some people say adoption isn’t the same as having your own children, but we can already see ourselves in them - through their language, expressions and mannerisms. It always gives us a warm and fuzzy feeling inside.​​​​​​

“They’re going to be with us forever, and I hope we can give them the security and happiness to achieve all their dreams."

Barnardo’s has more than 100 years of experience at finding families for children and offers support to potential adopters through every step of their journey, from the point of enquiry, through the approval and training process, to the moment you welcome your child into your family, and beyond.

In particular, the charity is calling for people who believe they could offer a forever family for children who are disabled, have siblings, are aged two and older, or those who come from a religious or minority ethnic background. They are strongly encouraging anyone who believes they can offer a loving family for these children and meet their needs to get in touch.

“Adoption changes lives, both for vulnerable children waiting for their forever families, and for prospective parents.

“At Barnardo’s we see every day the joy that adoption can bring for the whole family, and we know it can give children in care the chance of a positive future.

“Whatever your culture, religion or background, whether you are single or a couple, straight or LGBTQ, and whether or not you have children already, if you think you can provide a loving, stable family for a vulnerable child, we want to hear from you."