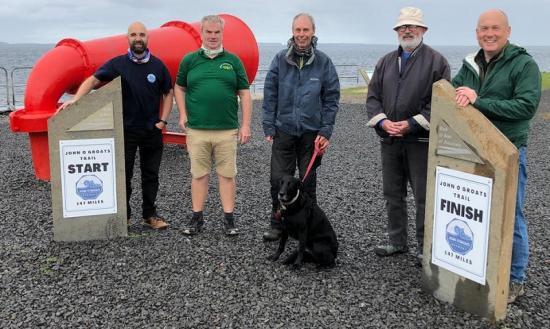 The John o' Groats Trail is a charitable project to develop a coastal trail in Caithness and Sutherland with additional links in Easter Ross to connect to Inverness, allowing a continuous trail walk to or from as far away as Land's End.

The walk from John o' Groats to Inverness is 147 miles and can be completed in 10-14 days walking, staying at accommodation along the way.

The goal is community economic development for the Far North, as well as development of a world-class recreational and heritage-access resource for the local population and walking tourists alike.

PHOTO - From the left: Simon Cottam (one of the partners of John o' Groats Brewery), Derek Bremner, Charlie Bain, Ian Ellis, and Jay Wilson (all 4 are volunteers for the charity building the John o' Groats Trail as well as the North Coast Trail which extends to Cape Wrath.