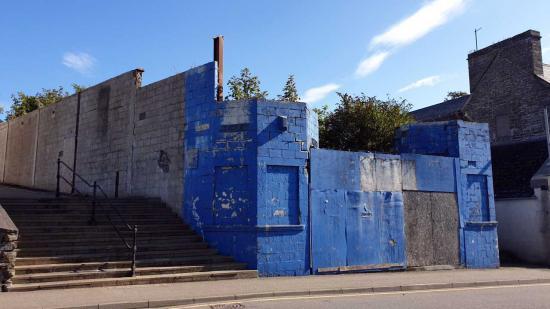 Two prominent derelict buildings in Wick High Street are to be demolished following decades lying empty. Numbers 30 and 126 (known locally as Dominoes (the former cinema) and Sloans are to benefit from demolition and site clearance, before ownership is returned to the local community.

The deal follows months of negotiations sparked by the town centre regeneration led by Ward 3 councillors. The Highland Council accessed grant funding from the Scottish Government's Vacant and Derelict Land Fund and Town Centre Fund. This funding was provided to the Highland Housing Alliance (HHA) to acquire both properties and land and manage the process.

HHA will now demolish both buildings and ensure the safe removal of all debris and contamination. Both sites, previously owned by Argyle Properties [Dundee] Ltd, will then be transferred to the recently established Wick Development Trust (branded ‘Wick's Heart') for redevelopment.

Speaking about the project, Gail Matheson from Highland Housing Alliance, said: "This is great news for Wick. Nobody likes to see derelict buildings on the High Street, and we are pleased to have the opportunity to work with the Highland Council and the Wick Development Trust to safely remove these eyesores from the High Street. The cleared sites will present some great redevelopment opportunities."

Nicola Sinclair, Ward 3 councillor and Acting Chair of the Wick Development Trust, said: "This is a major step forward for Wick town centre, which has been many months in the making. On behalf of Ward 3 members I want to express our sincere gratitude to Highland Council officers and HHA for their expertise, professionalism and dedication in getting us to this point. I know the community will be pleased to see an end to these eyesore buildings, and as interim chair of Wick's Heart I will help the public to discuss further development and access funding. This can be done with confidence since the cleared sites will not incur costs to the community, and for the first time we will have the power locally to move forward with a meaningful regeneration of our town centre. It's a bright light in these dark times."

Councillor Bremner said: "From the first pictures we took of derelict buildings in the summer of 2017 we were committed to tackling the problem in the town centre and to seriously deliver on regeneration. We knew it wouldn't be easy, many had tried before us and the problem has been with us for decades. We also knew that a number of folks in our community thought that we should just have the ability to execute compulsory purchase orders. That couldn't have been further from the truth. Nothing we looked at was easy. However, we were determined and hook or by crook, here we are. Two of the most well-known eyesores in the town centre, undoubtedly fine buildings in their time, will finally be no more. This has been a long time in coming but I hope the town's folk will be happy that the buildings will now be removed, and regeneration of the areas will now take place. I'd like to echo the thanks that has been given to the multiple teams, agencies, particularly HHA, and folks who have supported my colleagues and I in getting to this stage. What happens now will be for others to decide depending on socio-economic factors and regeneration plans but now is simply a moment to reflect on what we have achieved and to believe that if we can do this, over time, we can have the belief in the vision of further regeneration."

The Highland Council stressed its vision for continued regeneration in Wick, with Councillor Matthew Reiss, Chair of the Caithness Committee, saying: "Removing the derelict buildings at number 30 and 126 on the High Street is a significant milestone and indicates our continued commitment to regeneration in Wick."

Missives have already been exchanged and demolition work is expected to start soon. It is hoped that both sites will be ready for redevelopment by late 2020/early 2021. In the months ahead, Wick Development Trust will take the opportunity to discuss ideas for the potential use of the sites with the local community. At a time when communities have pulled together more than ever before during the Coronavirus pandemic, it is hoped that local people will have new and creative ideas for the sites that could benefit the people of Wick in the long term.

Located on the High Street at the corner of Oag Lane. The Pavilion Cinema was opened in 1930 as a skating rink. By 1934 it had been converted into a cinema, operated by Wick Playhouse Ltd., and films were booked at the Playhouse, Inverness. By 1937 it was operated by A.B. King's Caledonian Associated Cinemas Ltd. It had a 26 feet wide proscenium.

In the 1950's, when it was equipped with CinemaScope, the proscenium was 35 feet wide. By 1980, it was still operated by Caledonian Associated Cinemas, but had gone over to part time bingo on certain nights a week.

It was later converted into a nightclub, and was gutted by a fire in 1996. Only the lower portions of the front and side walls remained.

In recent years the derelict walls were painted blue although no one was sure why.