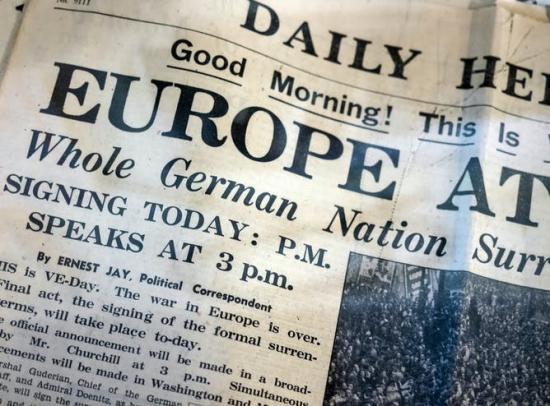 From The Conversation web site.

Shortly after 9pm tonight, once the Queen has made her VE Day address to the nation, many people around the UK will step out on to the doorsteps and balconies to sing a song together. We'll Meet Again holds a special resonance for Britons that goes back to the dark days of the second world war. Dame Vera Lynn, now 103, remains indelibly associated with the song. Here Kate McLoughlin, an Oxford expert in wartime literature, considers the simple words and melody that gave the country so much hope and recalls a very special meeting with Dame Vera.

As part of our VE Day special coverage Tim Luckhurst looks at how VE Day was reported at the time, remembering that while it was a massive celebration, many Britons were fearful for what the future might hold. And as the world celebrates this anniversary, we report on the memory war about perceptions of how the war in Europe ended and it's aftermath.

Our colleagues in France have also been working hard to mark the anniversary and, if you are a French reader, you can enjoy some of that content here too.