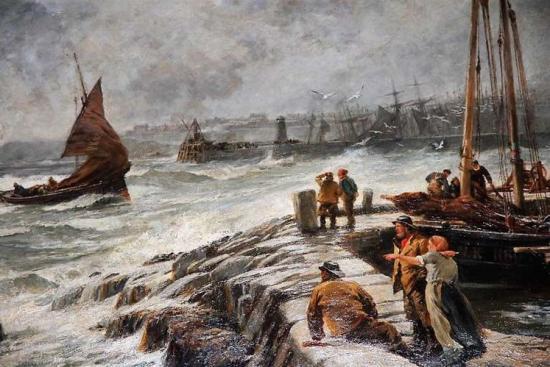 Black Saturday was, as reported at the time, a ‘fearful calamity'. In Wick Bay, alone, some 37 fishermen lost their lives, with countless more perishing around the coasts.

Black Saturday, tragedy as it was, only accounts for a small proportion of the total numbers of seafarers lost to the sea along the Caithness coasts, over the decades. To recognise and remember all those seafarers who lost their lives, a Seafarers Memorial Group has been established with the aim of designing and erecting an appropriate memorial that will provide a lasting place of remembrance.

Black Saturday, so named, happened on the morning of Saturday 19th August 1848 when the scale of the tragedy became obvious. The boats left as usual on the Friday afternoon but by the evening, the beginnings of a colossal storm became evident. Many of the boats began to head for home but in the early hours of the morning the severity of the storm caused boats to crash against each other as they tried to gain the mouth of the harbour.

By way of remembrance of those lost during Black Saturday, and the many more seafarers lost over the years, the Seafarers Memorial Group, along with others, have organised a commemorative wreath laying ceremony on Sunday 18th August 2019.

From 2pm on Sunday 18th August 2019 a flotilla of boats, led by the Isabella Fortuna will leave Wick Harbour and assemble in Wick Bay where a wreath will be laid in the waves.

With the support of the RNLI, and a number of locally based boats the ceremony will include a two-minute silence and the reading of the names of those lost on Black Saturday. Flags, both on shore and on the boats will be lowered to half-mast.

The public are invited to take up prominent positions on the Braehead, the North Head and where safety allows, on the North and South River Piers.

Black Saturday was, as reported at the time, a ‘fearful calamity'.  In Wick Bay, alone, some 37 fishermen lost their lives, with countless more perishing around the coasts.
[Museums and Visitor Centres]
9/8/2019

From Bill Mowat.   An unique ship from the 'golden era' of Wick's herring catching and food-processing industries has 'sailed back' to her home-port, over 70 years since she ceased having a prominent role at Wick Harbour.