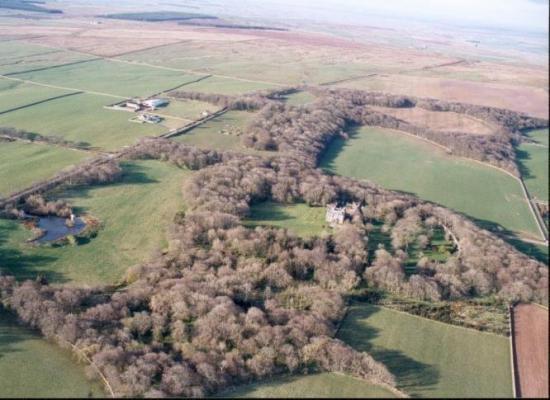 Enjoy a walking tour with the Head Gardener, Graham around the grounds of Olrig House, see the stunning bluebells and learn about some of the history and stories related to Olrig. Tours will run throughout May on Friday and Saturday at the following times. 10.30am and 12noon.

The first tour will begin on Friday May 3rd, and each tour takes approx an hour.
£4 each minimum of 5 people per tour, Maximum 20.

Tours will continue throughout the year. So we can get an idea of numbers let us know on here if you likely to attend.

If you have groups you would like to tour the grounds outside of these times please contact us direct. Tel 07707642004

The dignified, classical style, porticoed and pilastered house, built in front of the rear part of the house, was designed by David Bryce between 1859 - 61 but was only partly executed. This was built by the first owner James Smith Esquire. David Bryce was a famous Edinburgh architect who had a hand in most of the Caithness castle remodelling at that time.

The late 19th century works to the asymmetrical rear of the house are approached through a courtyard arch, rather Burmese in style, with a peep hole in it so that you could see anyone coming up the drive, without them being able to see you. There is a crowstepped gabled service range remodelled in 1880 at the same time as the alterations to the rear of the main part of the house and overlaying the 18th century part of the house.

The extraordinary styling of some of the interiors, notably the library, nursery and fireplaces are reputed to have been carried out by Major Alec Smith, the son of James Smith Esquire, who married the daughter of the Church of Scotland Minister, Isobel Gibson, both of whom were described as flighty. Major Smith also built the extraordinary archway beside the house, already mentioned.

Major Smith had two daughters Miss Ethel and Miss Mary, and you can see from their photographs which are on show , along with other photographs from the 1890's, their clothes and hats and the style of the furniture in Olrig House at that time. The Miss Smiths eventually moved to Ormlie Villa in Thurso and were looked after by their retainer John Duncan. On their death, he became the owner of Ormlie villa.

The Keiths of Thurso owned the house from 1913-1946. They were solicitors and sheriffs. Olrig house was requisitioned during the war and became Crown Estate property after 1946 until Mr John Morris and his wife Mary bought it in 1965/66 and owned it until Mr and Mrs Vellacott acquired it in 1993.

The gate lodge was reputed to have been built in 1880, the designer unknown but Mrs Elizabeth Beaton is of the opinion that it is by Sir James Gowans, who was renowned for his quirky buildings. It was remodelled in 1994 by Mr and Mrs Vellacott, who by their action saved this building, which had fallen into disrepair. It is a delightful, idiosyncratic, boldly gabled, steep pitched roofed building with wide overhanging eaves and many decorative features, including a bull's eye window. The gatehouse is situated at the main entrance to the grounds of Olrig house.