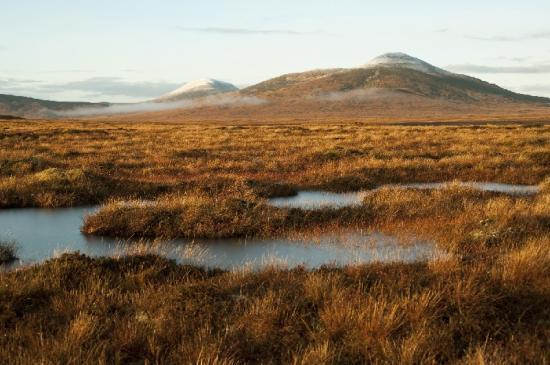 The Peatlands Partnership is announcing the start of an extensive community consultation over a proposed World Heritage Site for The Flow Country, the vast area of peatlands in Sutherland and Caithness that is now widely recognised as being the best peatland of its type in the world.

Joe Perry, the Peatland Partnership's World Heritage Site's Project Coordinator said: "A Flow Country World Heritage Site would not only be an enormous accolade for the area and the many organisations, land managers, crofters and farmers who have maintained this land for generations but it could also bring many positive development opportunities and undoubtedly some challenges too.

The purpose of the consultation is to find out what our local communities think about this idea and to see if we can help meet some of their aspirations through developing a World Heritage Site that meets their needs as well as recognizing the global importance of this vast peatland."

The consultation process will start on Tuesday, 14th May 2019 in Wick with the first of a series of thirteen drop in events around the area. These events, which will run from 11am to 7pm, except for Golspie which will be from 1pm to 7pm, are part of a larger community consultation about the whole idea of a World Heritage Site in The Flow Country.

The timetable for the drop-in events, running from 11am to 7pm, is as follows:

Independent chair of The Flow Country World Heritage Site Working Group, Mrs Frances Gunn of Tongue said: "It's really amazing to think that we have something right on our doorstep that ranks in global importance alongside the Great Barrier Reef, The Grand Canyon and The Pyramids! Who would have thought it?

The Partnership will collate all the feedback from these meetings as well as gathering local people's ideas and anecdotes about The Flow Country. This will help them develop a plan for taking the possible World Heritage Site forward in a way that takes local views on board and provides interesting opportunities for businesses and communities around the north.

Working Group members and the Project Co-Ordinator, Joe Perry, will be on hand at the drop in sessions to speak to folk and note their comments. Feedback forms will also be available which can be completed there and then or taken home to complete and send in at a later date.

David Richardson, of the Federation of Small Businesses, said: "The Flow Country is of international significance and yet it remains one of our best kept secrets and an underutilised asset. Population forecasts for 2016 to 2041 show a 21.1% decline in Caithness and an 11.9% decline in Sutherland, and many of the people remaining will be aging fast. We must do more to retain our young people and attract more young families to move in, and World Heritage Site status can and should play an important role. Not only will it protect what matters to us all environmentally, it will also preserve traditional land-uses and open up a whole range of new, sensitive, compatible and sustainable business opportunities. These, together with the many great businesses already in existence, will be able to market themselves as belonging to The Flow Country World Heritage Site - a powerful brand to conjure with!"

If anyone cannot attend the drop-in events, consultation forms will also be available on The Flow Country website at:
http://www.theflowcountry.org.uk/world-heritage-site
and on The Highland Council's online consultation portal at: http://consult.highland.gov.uk/portal/environment/flow_country_whs/flow_country_whs
Both these can be accessed from Tuesday, 14th May 2019.

The Flow Country
The Flow Country in Caithness and Sutherland is the largest expanse of blanket bog in Europe and covers about 200,000 hectares. A recent international study has described this area as being "the best peatland of its type in the world".  The Flow Country also importantly stores about 400 million tonnes of carbon in the peat which is almost three times the amount of carbon in all of Britain’s woodlands. The "ecosystem services" provided by The Flow Country are increasingly being recognised as major contributions to the Scottish economy.

A World Heritage Site Project Co-Ordinator has been engaged to help take the project to the next stage which is to submit what is called a Technical Evaluation to the UK Government’s Department of Digital, Culture, Media and Sport in the autumn of 2019. This post is funded by The Highland Council, Wildland Limited, RSPB and Scottish Natural Heritage.