A day spent playing bowls at the opening day of the season at Thurso Bowling Club was followed by a buffet tea after which they presented the cheques.

The three groups were -

Bill Fernie, chairman of Laurandy Day Centre thanked the members of the Francis Street Bowlers for their donations. He said, "We are fortunate to have such generosity towards charitable works in our community. The work of all of the groups play an important part in making things work well in our area. The constant need to raise funds is made much easier by such donations like these."

Leaving a Legacy to the Laurandy Day Care Centre

Give the one you love something extra special this Valentine's.   Forget the usual commercialised stuff from the supermarket and buy a gift that shows how much you care.
[Day Care Centres]
21/5/2018

The Laurandy Centre has been recognised as one of the leading home care services in Scotland.  The Wick-based day care service, has won the Day Service of the Year the recent Scottish Care Awards 2018.
[Day Care Centres]
24/1/2018 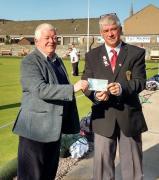 Jenny Spence and her fellow fundraisers find themselves at the forefront of a growing campaign to retain services in the Caithness General Hospital.   From a small fund-raising group normally donating items to the hospital they find themselves rocketing towards national status as they galvanise local groups and support into one campaign to retain and improve services at their local hospital.
[Day Care Centres]
14/4/2017

From 1st May 2017 Alzheimers Scotland will no longer offer their services in Caithness for people suffering from dementia.   Couthie Corner, Thurso based at Bayview will no longer be run by Alzheimer Scotland but will instead be run by the NHS and the Longberry day service in Wick will be taken over by Laurandy.