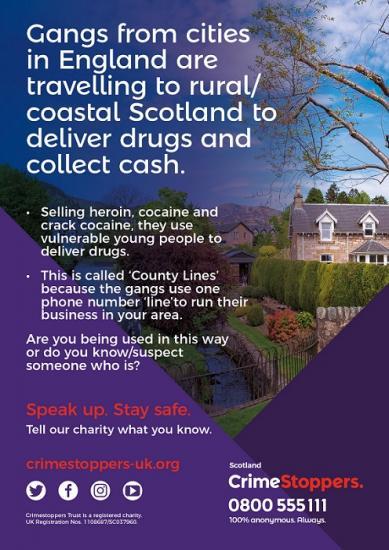 The charity Crimestoppers is on 14th January 2019 launching a campaign to highlight the pain and suffering that criminals from English cities are inflicting on vulnerable people in Scotland's rural and coastal towns.

The campaign aims to raise awareness of County Lines, which is when criminals from major cities such as Liverpool, Manchester, London and Birmingham are expanding their drug networks to other areas, bringing with it serious criminal behaviour such as violence, exploitation and abuse.

The term County Lines refers to the use of a single telephone number to order drugs, operated from outside the local area.

This is having a massive impact on rural communities and also on vulnerable children and adults who are being recruited in cities such as Manchester and Liverpool. They then transport cash and drugs all over the country, so that the criminals behind them can remain detached and are less likely to be caught.

They often set up a base in a rural area for a short time, taking over the home of a vulnerable person by ‘cuckooing' and use adults and children to act as drug runners.

Law enforcement across the UK, including here in Scotland, has made significant arrests of people involved in this type of activity. Many vulnerable adults and children who have been coerced into these activities have been safeguarded.

Angela Parker, Scotland National Manager for the independent charity Crimestoppers, said:"County Lines isn't necessarily a term people are familiar with, but as a charity it’s important we raise awareness of this issue and help tackle it.

"Gangs coming into our communities here in Scotland, particularly the north east, are not welcome. We want to ensure that if they do decide to set-up their operation here, that your information can help get them removed and keep communities safe.

"When you contact us we won’t judge or ask any personal details. All we want to know is what you know. You’ll remain 100% anonymous. Always."

The campaign will use a series of `spot the signs’ posters, postcards and social media tools to help raise awareness of the issue across Scotland.