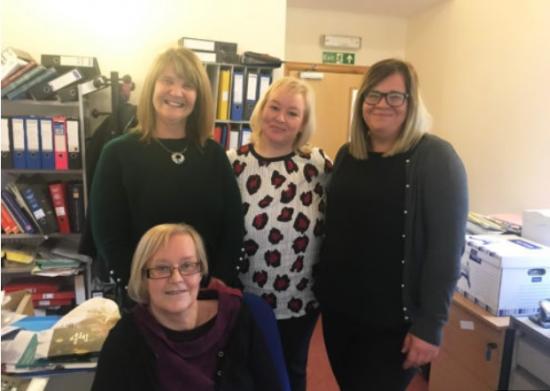 Caithness Voluntary Group, in partnership with Pulteneytown People's Project and Thurso Community Development Trust have been awarded 183,296 to employ the four full-time development workers and a part-time co-ordinator.

The community will be consulted about the priorities. The aim of the project is to identify gaps and inequalities through community consultation with local groups being involved.

The money came from the Scottish Government's Aspiring Communities Fund, which is supported by the European Social Fund.

Do you need to recruit new Volunteers For your organisation? CVG are organising a drop-in event in Multitown Peoples Project on Wednesday 4th May.   This is an opportunity for you to come along in person and or send in leaflets and information about your volunteering opportunities.
[Community Groups]
8/4/2022

We are looking to boost our volunteer members.  Our success in delivering groups and clubs here at the centre has always been enhanced by the life skills and knowledge of our volunteers.
[Community Groups]
26/1/2021

Beatrice Partnership Fund has reopened for the final time.  The fund supports projects that are based in the East Coast of Caithness and Sutherland plus the following Community Council areas in Rosshire, Edderton, Tain, Inver and Tarbat.
[Community Groups]
16/1/2021

An American millionaire Dr Betsee Pekr has donated £40,000 to Pulteney Centre after opening the doors of her private residence to producers of the Netflix hit drama The Crown.   Dr Betsee Parker is an Episcopalian minister and philanthropist from Virginia, bought Ackergill Tower in early 2019 from Clarenco after it ceased trading.
[Community Groups]
17/11/2020

Robertson Trust is now open for applications.  The funds available are: Wee Grants For constituted community groups and charities with an annual income of less than £25,000  Funding of up to £2,000 for one year only  Could cover revenue* or capital costs to support your work.
[Community Groups]
15/10/2020

HTSI are very excited to bring you a series of Monday Masterclasses, training centred around supporting community groups.   Set up a new group recently? Working to support your community? Want an update on current best practice in supporting community groups? Then HTSI's FREE Monday masterclasses are for you! Julie at Caithness Voluntary Group is doing two of these classes that are open to everyone in the Highlands and are free.
[Community Groups]
25/9/2020

Does Your Group Need Help To Hold Meetings Online?

Message From Alan Tait at Caithness Voluntary Group.   Sadly it seems that the Covid -19 restrictions are going to be with us by the looks of it over the winter I know a lot of groups were in abeyance since March but were starting to think about getting activities going again.
[Community Groups]
23/9/2020

Thanks to Yvonne at Caithness Voluntary Group for putting together a few funding suggestions that may be of interest to local groups.   Comic Relief Changemakers Fund The themes for this Fund are, Children Survive & Thrive, Gender Justice, Safe Place to Be - Homelessness, Safe Place to Be - Migration, Global Mental Health.
[Community Groups]
7/6/2020

Eleven community organisations in the Highlands and Islands have been awarded a total of £1.5m to develop and deliver long-term solutions to tackle poverty based on local priorities and needs The Aspiring Communities Fund, which levers in European Social Funds, was launched by the Scottish Government in 2017 to help reduce poverty and enable inclusive growth in disadvantaged and fragile communities across Scotland.   Regional development agency, Highlands and Islands Enterprise (HIE), helped community organisations in the region to apply to this recent round of funding.