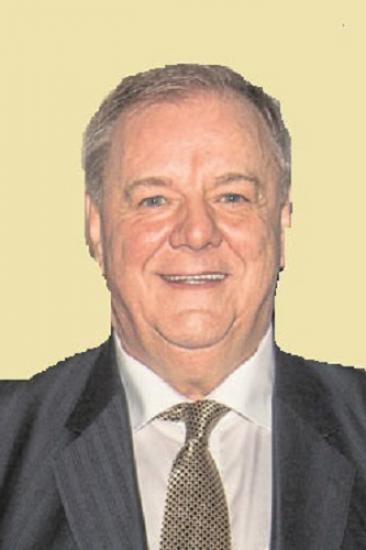 John William 'Jocky' Sutherland, who died suddenly of a heart attack at the age of 68 on 28th August, 2018 at his home in Wick, Caithness, was a charismatic self-made businessman. He will be chiefly remembered for his key role in re-launching the traditional, but near moribund 200-year-old Caithness flagstone 'pavement' industry into the modern era, from the early 1990s onwards.

The tycoon's other firms will also remain prominent in a range of Far North enterprises, from entertainment to farming, house-building, providing laundry services to local hotels and an estate-agency, thanks to his sons' directorships and management.

That was as well as developing 'ornamental', interior decorative, or 'rustic' uses for the Devonian geological-era naturally-layered sedimentary rock that can be 'easily' won from the horizontal seams, with the right knowledge and equipment.

And that's not to mention its use in prestige projects from the Scottish Parliament's Holyrood building to New York's Hanover Gardens memorial for the British victims of 2001's 9:11 terrorists outrage and the four six-metre high monolith-style 'standing stones' at the entrance to the University of the Highlands & Islands' main campus in Inverness.

Every day tens ... if not hundreds ... of thousands of Scots walk on streets paved with the lovely, hard-wearing naturally-riven (and thus non-slip) flagstone, especially in city and town centre redevelopments completed over the past quarter-century, largely thanks to ebullient Jocky Sutherland's efforts.

But few give a thought as to its origin or the entrepreneur responsible for providing the unique product that civil engineers and landscape architects had specified nor the skilled installers who precisely emplaced the relatively-thin slabs of sawn flagstone. Caithness flagstone, supplied as a precision engineered, finished, product from Jocky's company, is now laid in the environs of some of our finest ancient and modern buildings or enhancing well-loved streetscapes, such as in Edinburgh's Royal Mile.

His Caithness Flagstone Ltd company has two of Jocky's sons, Paul and Robert as directors, who state that they will carry the firm forward.

Mourners in the packed congregation at Wick's St Fergus Parish Kirk, where minister the Rev. John Nugent conducted the funeral service, included a small group from Utrecht in the Netherlands. CFL is close to completing its biggest 'city centre' renovation contract yet won in mainland Europe there.

For much of the 19th Century, from the 1820s onwards, quarrying Caithness flagstone and sawing those as street-pavement, was a key industry in the Highlands.

It owed its prominence to its advocacy by brilliant Inverness-based civil engineer Joseph Mitchell ... trained by Thomas Telford ... who, after conducting strength-tests, specified it for the first-time paving the streets of his adopted town and arranged for local laird James Traill to open a quarry and an associated sawing mill at Castlehill, Castletown, near Thurso, Caithness.

Mitchell's reputation was such that other UK towns rapidly followed his practical example, in an era when easily-maintained pavements drastically reduced (earlier) serious health hazards, as the Industrial Revolution gained top-gear speed.

At its Victorian-era peak, it provided steady year-round employment for up to 1,000 men counting the carters or tram-line operators delivering flagstone from the quarries to steam-powered milling factories lining the estuary of the River Thurso.

From there and other smaller harbours on the Far North's seaboard, ships delivered the finished 'pavement' for the streets of Britain and its Empire plus to most of Northern Europe, not to mention providing platforms for train stations on fast-growing railway networks.

Another important use was providing durable heavy decking for 'topping' the piers and quays of the ever-expanding ports and harbours that kept the Imperial colonies linked by sea to the UK homeland.

But come Edwardian times, the Caithness stone industry was almost killed dead overnight by the arrival of mass-concrete as a much cheaper, if less hard-wearing, product able to be cast 'with ease' into street-paving slabs. Dozens of previously-busy Caithness flagstone quarries were abandoned as uneconomic and the stone-cutting mills closed.

In the immediate post-1945 era, local authorities in the Far North attempted a revival to provide local jobs, specifying the lovely flagstone as a building and decorative material for Council house schemes, notably in the redevelopment of Thurso's historic 'Fisherbiggins' and on the frontage of homes in the town's Springpark estate, facing the busy A 836 main road along Scotland's North Coast.

But by the 1970s/1980s, only one Caithness-flagstone quarry remained active, sometimes providing small-batch 'bespoke' products for restoring kirks or private-house Victorian roofs and driveways.

Father-of-six John Sutherland, born within days of the end of the 1940s decade, was the second son of Ian and Hilda Sutherland, who farmed near Bower, a Caithness village on the road between Wick and Castletown.

A keen pupil at Bower primary school where John was first dubbed 'Jocky', he went on to Wick High.

Whilst still a schoolboy he established a small flock of pedigree rams as well as being a keen footballer with the village's amateur team and winning prizes for such as stockman-ship, dancing competitions and speech-making with the local Young Farmers' club.

In his teens, he served an apprenticeship as a butcher in Thurso and some now-elderly housewives recall him on the delivery bike from shop to homes.

With a 'trade' secured, Jocky decided to emigrate to Australia. From Sydney he went Queensland's Gold Coast, where he met his future wife Catherine. Together they established a chicken rearing business in a 'croft-sized' seven-acre holding amidst sugar-cane plantations.

After some years of moderate success with 'Jocky's Chunky Chickens', he decided to take Cathy and their (then) two sons back on holiday to his homeland ... but the family decided to stay, Jocky sensing that there were real opportunities for profitable business there.

Initially, he envisaged a 'fresh chickens' facility in Wick until he heard locally that famed Glasgow landscape architect Rodney Beaumont ... who had been behind the 1980s successful Garden Festivals first in Liverpool and then on a larger scale in his home city ... was a 'fan' of Caithness flagstone paving.

In what was a virtual re-run of Mitchell's advocacy, but 160 years on, Beaumont had found that his major Scottish practice was unable to specify the fine material for use in city-centre pedestrian & refurbishment schemes, as those were almost wholly undertaken by public-sector or municipal bodies, where at least two competitive tenders were demanded.

In the meantime, Jocky had made some 'property-development' money locally by converting the late Sir Arthur Bignold's Victorian mansion in Wick into flats for sale ... the early 20th C MP had left it as a base for the area's cottage hospital which became redundant and was marketed after the NHS built the new Caithness General in the town.

Jocky did his homework and 'discovered' that the best best-regarded seams of the 400 million year-old flags lay under 6 metres of topsoil 'tirrings' near the Caithness hamlet of Spittal, (on the now A9 Causewaymire road) rather than in the vicinity of Thurso or Castletown, where the major Victorian workings had been. He also elicited from quarry veterans that skilled laying of the flagstone pavements was a prerequisite to success.

Things came together surprisingly quickly after he stopped-off for a pint at the bar of the Commercial Bar in Halkirk, near Thurso.

There was local man Patrick Mackay, known as a self-employed skilled operator of excavators and other mobile heavy plant, who was bemoaning the (then) scarcity of contracts in the Far North.

Also in the pub that evening was a farmer from Spittal, who was griping about poor prices for his crop of lambs.

A deal was done there and then with a handshake over a dram of whisky; a large field was purchased for £3,000:00 with Jocky and Patrick each pledging to invest £1,500:00 each. The former arranged to get the legal matters in progress the very next day, just as Partick got his digger in excavating action at Spittal Mains farm.

Patrick ... who was bought out on his retirement in 2007 ... had barely uncovered the productive 'pay-zone' when the pair became aware of a contract for paving alongside the River Lagan in Belfast, Northern Ireland.

The UK Government's Laganside Corporation wanted 15,000 square metres of stone for redeveloping its Riverside area; so Jocky submitted a sample panel, but there were forty other quarry firms bidding.

As Jocky said at the time: 'In their good judgement they selected ours' ... and so successful was the project that the firm has subsequently sent pavement covering for ten times that area in Belfast alone, not to mention major deals from other Ulster towns such as Newtownards.

As news of the quality of the delivered, laid, stone spread, so did paving contracts roll in to company's headquarters at The Shore in Wick: from Edinburgh, around Glasgow's Royal Concert Halls and on Sauchiehall Street, for pedestrian precincts in Dundee's and Inverness's city centres, amongst others in many smaller Scottish towns.

Jocky's business hub is alongside his Waterfront night-club, established in a converted, disused one-time herring-curing yard, when Wick was Europe's biggest fishing port over a century ago; he dubbed its lounge 'Silver Darlings' to mark the link.

The seams at Spittal became near-exhausted, but the finishing factory and showroom remain there with stone being brought in from nearby Achscrabster quarry, where the layers are of the same geological 'sequence' of similar quality, but lying at deeper levels beneath the local top-soil.

At an early stage in the business's development ... and with a little help from the Highland Council's development section ... Jocky took several trips to the famous Carrara marble homeland in Tuscany, Italy, that annually hosts the world's biggest trade-fair for stone-handling machinery, where he learned fast.

By 2010, a trade magazine writer wrote that his quarry and milling works were amongst the very best-equipped in the UK; 'high productivity' is the rule. As well as modern diamond-tipped saws, Caithness Flagstone Ltd uses a high-pressure water-jet stone-cutter, a CNC (computer numeric control) work-centre, specialist stone-polishing kit and a state-of-the art laser etching machine.

The latter two allows the firm to access markets for indoor floorings, bathroom worktops and interior furnishings, the memorial and commemorative plaque trades, whilst the company's graphics artist designs flagstone-based household goods that are then sold over the internet as well as from CFL's showrooms at Spittal.

His innovations meant that the owners of the other long-established 'rival' at Spittal had to up their game to compete, whilst a handful of other firms have joined the industry. Today's total of around 70 staff annually produces broadly the same quantities as did 1,000 persons in Caithness flagstones' Victorian heyday.

In 2016, Jocky's son Robert travelled to London to receive three honours from their industry peers presented by former top politician and TV personality Michael Portillo at a gala awards dinner; (a) for regeneration, (b) for town centre redevelopments and (c) for creative design.

Tributes poured in for Mr Sutherland. Caithness Chamber of Commerce CEO Ms Trudy Morris said: "We are saddened at his sudden passing. He was a fixture of the business community here, he supported the Chamber's activities and generously sponsored our 'Young Entrepreneur of the Year' and 'Young Business' Awards over many years'.

He said : 'Jocky was an active Authority member and he regularly came up with good, fresh ideas. That was important to us with the port being redeveloped, so that it is now at its busiest for many decades'.

Wick Harbour now services the major new nearby SSE Beatrice offshore wind-farm, to which over 200 workers commute daily from the port.