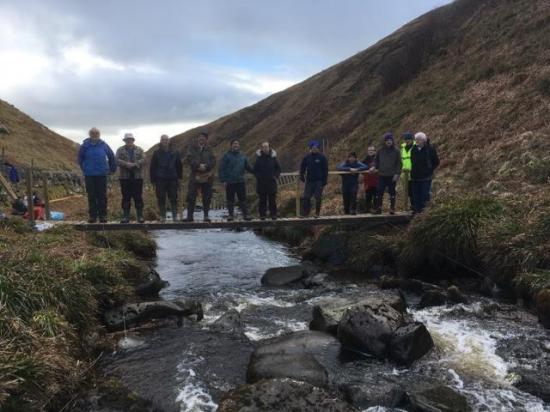 Jay Wilson Chair, Friends of the John o' Groats Trail, gives an update he new bridge they have built at Ousdale.

Today (25th March 2018) marked one of the key moments in the history of the John o' Groats Trail. A team of 14 people built an 8-metre bridge across the Ousdale Burn, one of the largest burns along the Trail. They worked from 11 to 5 to complete the project, despite rain and cold. They were preceded the Sunday before by a team of 7 who brought the heavy materials, including two steel heavy beams, down the steep hillside. Ruard Erridge of Far North Fencing led the team and designed the bridge on the go, working to professional standards and with great leadership skills in collaborating with volunteers. The charity the Friends of the John o' Groats Trail, and all the people who walk the trail from this day forward, owe a great debt of gratitude to these volunteers who gave up their Sundays and braved the steep hillside, the swift waters of the burn, and the weather in order to complete this work.

Thanks are owed to others as well. The Welbeck Estate not only gave permission for the work, but also donated the steel beams that provided the main structure. Anson McAuslan, the Estate factor, also suggested the basic design. Additionally, the Beatrice Partnership Fund gave the funds for the other bridge materials as part of an upgraded trail in this area. Thanks are also due to the walking groups along the trail whose members helped build the bridge: the Inverness group of the Ramblers, the Sutherland Walkers Group, the Caithness Waybaggers, and Hillwalkers Anonymous.

The name Ousdale in Norse means "dale in the middle of nowhere" and Ousdale still lives up to its name. This is by far the most remote burn crossing on the trail, and as such has always been a safety concern. Each stage of the trail is rated in difficulty Green, Amber, or Red. Until today, the stage from Helmsdale to Berriedale was the last one still rated Red. Now it has been reduced in difficulty and will be rated Amber. A chain is only as strong as its weakest link, and today's work has made the entire trail better, easier, and safer to walk.

The John o' Groats Trail or JOGT started work in Spring 2016 and has seen steady improvement through building of stiles and bridges and the marking of the trail route. Despite continuing works, there were more than 20 long distance walkers on the trail last year, including some going (or coming from) as far as Lands End. This year we anticipate many times that. Our work goes on to improve and maintain the trail. We offer many volunteering opportunities from engineering works such as today's project to whin cutting and bracken bashing. We are on the web at jogt.org.uk and you may contact us through our web site.

For anyone wondering what they are like: Basically we walk, stop, look, discuss the scenery and history of the things we are looking at, walk on a bit, stop for lunch, eat some homemade biscuits (these are also free), walk on again, repeat.  These are not aimed at stomping along the cliffs trying to break records and we walk as fast as the slowest (or most scenery fixated) walker.
[Community Groups]
18/3/2018