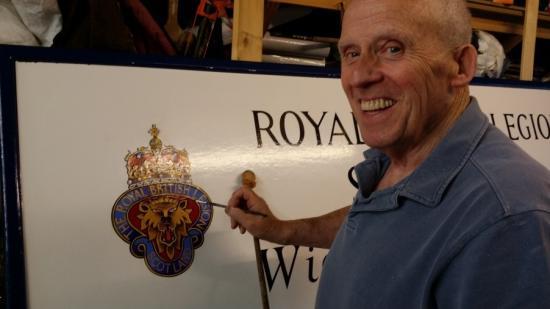 Royal British legion Scotland Wick Canisbay and Latheron Branch, over the last year have had a very busy, rewarding and successful time.

The members saved from demolition and purchased The North Head Soldiers Memorial Tower in Wick at the start of the year, they have since secured grant funding to restore it back to its original 1909 condition. Wick High School has partnered with RBLS with pupils undertaking valuable research into the lives of Waterloo and Trafalgar Caithness veterans.

Recently the Branch held their annual RBLS Mey Highland and Cultural Games at John O Groats. This year under the sub-committee chairman Barry Butler, the Games tripled in size raising funds in support of our own local military veteran's welfare needs. Wick, Canisbay and Latheron RBLS Branch is the only RBLS Branch in the country to run a Highland Games, and only one of two games in Scotland with Royal patronage. The chieftain being HRH The Prince Charles Duke of Rothesay who attended.

In a bid to re - engage with valued members and to ensure effective communication Chairman Capt Richard Otley has recently personally written to all members present and lapsed.

Going forward the branch has introduced a monthly draw for all members and hopes to further build on the success of the recent annual RBLS Mey Highland and Cultural Games, making next year's event even bigger and better.

The Branch has also paired up with the Returned Serviceman's League in Australia and is planning on sending Wick veterans to Australia to participate in ANZAC Day 2018.

Going forward the branch has introduced a monthly draw for all members and hopes to further build on the success of the recent annual Mey Highland and cultural games, making next year’s event even bigger and better. There will also be quest speakers giving talks at specially arranged evenings throughout the year.

Another project successfully nearing completion is the new signage for use by the branch kindly hand painted by Alex Patterson. All in all it’s been engaging year so far for RBLS Wick, Canisbay and Latheron and they hope that by re engaging with and improving the experience for members many more successful and rewarding years to come.
The Branch’s annual Remembrance Dinner open to all members will be held at the Francis Street Club on Wednesday 8 November 2017

If you would like to become a member, renew your membership or find out more about the work of RBLS Wick Canisbay and Latheron please get in touch with Chairman Capt Richard Otley tel: 01955 621709.