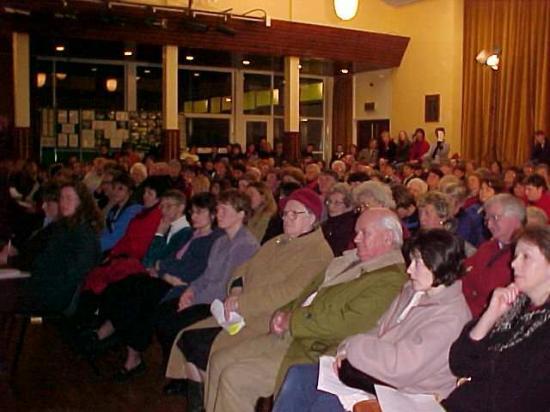 The meeting in Wick High School was packed out on Monday night as the people in East Caithness reacted to the perceived threat to maternity services. The representatives were grilled and in typical Wick fashion the audience demanded improvements not downgrading to services.

Notwithstanding the threat to Obstetricians people said they wanted more than just to retain the services they wanted improvements such as a Paediatrician service also to ensure better facilities in Caithness. It was standing room only in Wick with over 500 people so over to you Thurso and the West side lets hear your voice loud and clear at the town Hall on Tuesday night.

Councillor Deirdre Steven got a huge round of applause as she demanded that the services of consultant obstetricians be retained in Caithness. Any hint from the Health Board side of suggesting that a mid-wife led service would still provide an excellent service were greeted with howls of disbelief.

Many questions were aimed at the panel and several examples given of how mothers and babies would have died in the past if it were not for the expertise available in the county. Recent weather conditions were highlighted to show how impossible it was to reach Inverness when road, rail and air services marooned Caithness.

Also highlighted were the increasing employment opportunities now coming to Caithness which were at least partly based on the good health services available and this could be put in jeopardy were they to be downgraded.

The chairwoman had difficulty in closing the meeting following John Rosie's impassioned plea and determination to fight any lowering of the standards of maternity services.

[This article has been transferred here from our archives]