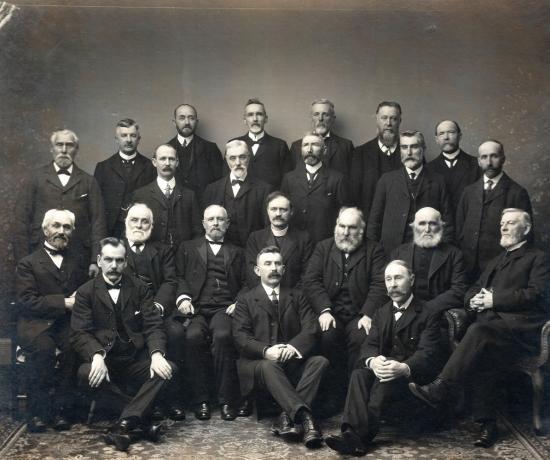 A very good photo has been sent to us by Graeme Lyall of the Reverend Alfred Coutts and the elders of the United Free Church, Bridge Street, Wick. The photo was taken by Johnson Photographers.

Rev. Couts was an army chaplain in the First World War.

To see a larger photo click on the Photo Gallery then right click the photo there and open in a new window.

From the booklet Chapter 10 -

A New Manse
He was followed by one Alfred Coutts. Mr Coutts preached before the Vacancy Committee and when asked if he would accept the Charge he said that he would. There was, however, a condition. The Manse in Robert Street was adjacent to MacEwans sawmill. The machinery, he understood, made an ear-splitting racket at an unsociably early hour. He would come, but, please let a new Manse be built well away from such disturbance. The Deacons Court met and agreed to his request. It so happened that one of the Elders had recently built a house for himself. He generously gave the use of it to the Church until a new manse was completed. This was done in a little over two years. The new manse at the end of Miller Avenue overlooks the Wick River and is surrounded by fields of permanent grass. The noise problem had been overcome. The Manse was completed in 1912.

The war to end all wars would shortly shatter the easy confidence of perpetual progress in all fields of human endeavour. Mr Coutts was soon serving as a Chaplain in the army. Later he obtained a Doctorate in Church History. An important feature of his Ministry was an organisation called the Brotherhood which met weekly for worship and Bible Study. The movement was nation-wide and each branch had its own banner so it was necessary for the Wick Branch to have one also, but who would design it? The story goes that the wife of the Minister had a dream and in her dream Mrs Coutts saw the form of the banner in deep blue with the frontage of the church forming the main centre panel. Below was the first verse of the hymn "Courage brothers, do not stumble, though thy path be dark as night, There's a star to guide the humble, trust in God and do the right." The Banner was design adopted and in due course it was sent north to Wick from the manufacturers. The banner may now be seen in Wick Heritage Museum in Lower Pulteneytown. Once a month the brotherhood held an open meeting when people came from allover the town. It sometimes happened that every pew was taken and the pulpit steps used as extra seating.

The Communion table was dedicated as a War Memorial in 1926. It bears the names of forty-four men of the Congregation who did not return.