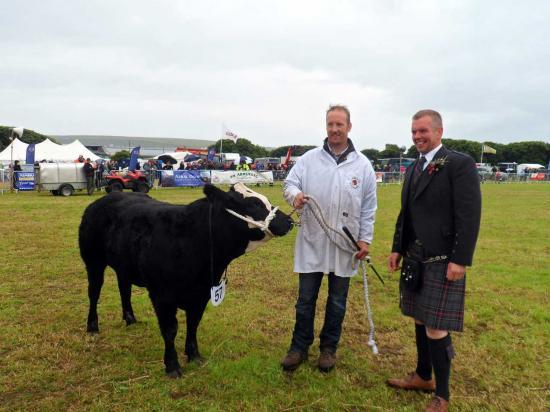 Cattle
Aberdeen-Angus: Champion - B and J Mackay, of Skitten, Wick, with Balmachie Roderick, a thee-year-old bull sired by Balmachie Benvorlick.
Beef Shorthorn: J Campbell and Co, of Todholes, Thurso, with Ballylinney Daisy, a 17-month-old daughter of Podehole Edward. Reserve - J Campbell and Co with the 2016 and 2015 champion Todholes Rose Jenny, a six-year-old cow by a different Podholes sire.
Highland: S Gillon, of Lower Toftingall, Watten, with Robina of Aviedale. By Angus of Lyntoun, out of Myra 9 of Lagg. Reserve - I Gunn, of Cairwald House, Swiney, with the five-year-old cow, Primrose 10 of Knockendon, by James Beusach of An-Sidhean. She is out of a previous Knockendon cow.
Charolais: Champion and reserve inter-breed beef - W and A Oag, of Brims Mains, Forss, with home-bred Charolais Shebster Lucy, a 14-month-old heifer by the AI sire, Alwent Goldbar. She is out of a home-bred cow by Burradan Talisman. Reserve - J Morris, of Olrig Mains, Thurso, with Olrig Jadore, by Dingle Hofmeister and bred from the former Highland Show champion, Olrig Dubarry.
Simmental: Champion and reserve – J Sinclair Gunn, of Clairdon, Mabsey, Lybster. Champion was Omorga Five Star by Kilbride Delboy. Reserve – Mavsey Graceful, a home-bred yearling heifer by Keldrum Clio, out of Mavsey Dancer.
Continental: Champion and reserve – JJK Manson, of Upper Northfield, Wick, with British Blues. Supreme was Graymar Halle, a massive three-year-old in-calf female by Empire D'Ochain, out of Graymar Electra. Reserve – Caithness Krystal, a Drift Domino-sired nine-month-old heifer out of Caithness Caledonie.
Commercial cattle: Champion, supreme cattle and overall champion of champions – J Munro and Son, of Invercharron, Ardgay, with the supreme overall from Latheron, Kiss My ... a September-2015-born home-bred heifer got by the AI British Blue sire, Tweeddale Guiness, out of a home-bred Limousin cross cow. Reserve – Dunbeath Farms, Dunbeath, Caithness, with a February-born Limousin cross stot by Haltcliffe Headman.

The rain stayed off for most of the day.   Welly boots were in evidence to get around the show ground..
[Agriculture]
19/7/2003