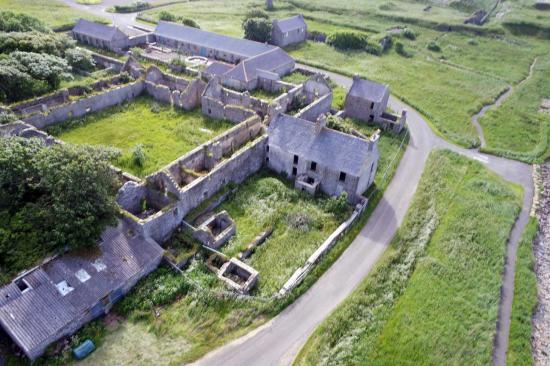 Castlehill lies just outside Castletown, Caithness. The area was once famous for its flagstone industry and the nearby harbour is evidence of that. There are very nice walks around the Flagstone trail and along the coast to nearby Dunnet Beach.

FLAGSTONE INDUSTRY AT CASTLEHILL
This area was the cradle of the Flagstone Industry which was begun here last Century by James Traill of Rattar, Sheriff of Caithness.

The short walk follows the progress of a piece of flagstone from it being raised in the quarry to shipment from the harbour. It will reveal the remarkable history behind Caithness' most versatile and durable natural resource. Flagstone had long been used as a building material in the north of Scotland for paving, field dykes, walls and roofing. However when James Traill came to Castlehill House overlooking the harbour (the house was destroyed by fire in 1967) he commenced the production of paving stone on a commercial basis. The first cargo left Castlehill harbour in April 1825.

The Quarry
The stone was obtained from the quarry which ran from below the car park and extended up through the Castletown village for almost one mile. The facility of Caithness sandstone to split into thin slices or flags(from the norse word 'Flaga' - a flag) occurred because 370 million years ago a Great Lake covered the whole of the north of Scotland and out into the North Sea. the bed of this lake was formed by successive layers of sediment. Between the layers the lake dried out, leaving dead fish (fossils) and the subsequent planes along which the rock now splits. The flags were raised by hand using levers. Very little blasting was employed to break up the rock. At the height of production in 1902, 35363 tonnes of flag was produced, valued at £23,239 - a huge sum in those days.

The Windmill and Dam
Before the introduction of a steam engine in 1861 the stone was quarried in dry weather and cut in wet weather when there was water to fill the dam. The old wind-mill tower is now a scheduled ancient monument and a unique feature of the site. Originally the building had a box on the top of the tower which turned face to the wind. Four vertical sails were fitted to this box. It was used in the very early days to pump water draining out of the quarry. the water was pumped into the dam and was then fed through two sluices to operate an overshot wheel. This then powered the saws.

The Harbour
The harbour was constructed for James Traill by James Bremner, a native of Keiss who became famous as a wreck raiser and harbour builder. The pavement produced in the cutting yard was brought by means of trolleys and loaded by hand on to the small schooners. At first the product was shipped to ports down the east coast of Scotland and England, but as the product became famous it was exported all over the world, as far as Australia and South America. The Strand and the concourse of Euston station in London were paved with Caithness stone which was famed for its quality and durability.

The Cottages
Some of the quarry workers lived in two cottages on the left. These demonstrate the use of native stone in providing floors, walls and roofs. Water was obtained from a well just beyond the tunnel which gave access from the cutting yard. Life was simple, but they had a garden and probably kept some livestock. The cottages were continuously occupied until the 1940's. Originally the cottages were further from the sea. Over the years the waters of Dunnet bay have encroached on the site, eroding some of the area. To the right was the cutting yard where the odd shaped 'as quarried' stones were cut into squares and rectangles.

The Water-Wheel and Cutting Yard
The stone was originally cut by hand using a rough toothed saw held in wooden guides on the flag and pulled back and forward by two men. Later, by the 1840's mechanical saws were in operation powered by the water-wheel set in the pit in front of the dam. These saws were supported on strong frames about 15 feet high, the base bolts of which may still be seen. Two pivoted arms swung the saws to and for across the surface of the flag. Water was used as lubrication and long boxes above the saws held coarse sand which trickled down into the saw cut and acted as an abrasive. Although several stones could be cut at the same time progress was slow and a cut could take two or three hours. In the early years of this century 500 men were employed here. Due to the competition from concrete paving and the high cost of carriage, the works at Castlehill closed in the 1920's.

Interpretive Panels are situated at strategic points along the Trail. These explain the history and workings of the flagstone industry.

Information on the flagstone industry provided by the late John Porter.

Technology is changing how we all work and play and Castletown Heritage Society like many other groups held its AGM last Thursday on Zoom.   The group are not sitting idly by as things change and have decided to present more about their area on Youtube.
[History]
9/2/2019

Saturday 15th August Join Melissa and Romain of the School of Ancient Crafts as we explore how plants and herbs were used in the past.  This workshop will include a spot of foraging as well as making soap with native herbs, using pot-boilers (hot stones) to heat milk and make a soft cheese, baking bread next to an open fire, and much more! Join us again on Sunday 16th August to learn how to build a prehistoric oven in which we will bake fish and bread.
[History]
17/1/2015