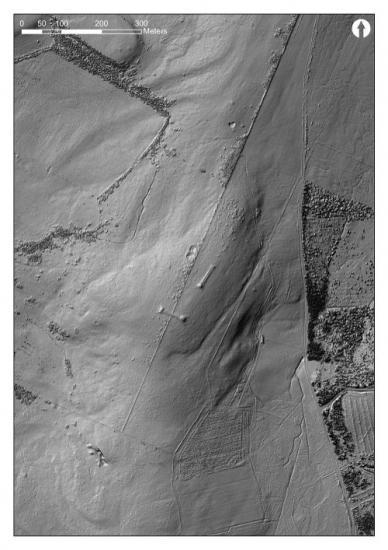 From the Caithness Field Club Bulletin 2014

Caithness is well known for its spectacular archaeology but aerial laser scanning surveys carried out in the county have revealed glimpses of the hidden archaeological landscapes that are less easily appreciated. These surveys are enabling a re-examining of the history of northern mainland Scotland.

AOC Archaeology Group was commissioned to undertake two such surveys in 2012: by Baillie Windfarm Ltd to carry out a LiDAR survey in response to a requirement to record the landscape surrounding the nationally significant cluster of Neolithic chambered cairns at Hill of Shebster; and by nPower at the Burn of Whilk windfarm near the archaeological landscape of Yarrows. The main focus of the first survey was Cnoc Freiceadain, a prominent shoulder rising above the northern coast of Caithness, which is the site of a spectacular group of Neolithic monuments including two long cairns and a series of stone settings. The second covered the whole of the Yarrows, an area rich in archaeological monuments spanning all time periods.

The method of survey used is known as LiDAR, which stands for 'Light Detection and Ranging'. Detailed images are created through the laser scanning of the ground from a small aeroplane. Modern instruments emit between 20,000 and 100,000 measurements (points) per second, and by mounting a laser scanner on an aircraft, very large areas can be scanned in great detail. Nearly a billion points were collected during the recent survey around Hill of Shebster. The raw data is processed to create very high resolution elevation models - three dimensional images that are detailed enough to record the smallest lumps and bumps in the landscape. These could be anything from modern walls to ancient monuments. The measurements are so precise that the slightest change in contour will show up, so sites that can be hard to identify with the naked eye, such as ancient field systems and badly eroded hut-circles, can be identified.

One of the advantages of LiDAR is that the data collected can be processed in such a way that trees, bracken, foliage and so on do not affect the final results. The light beams can penetrate the smallest of gaps in vegetation, meaning that the ground surface beneath can be mapped as though it was clear of plants or trees. The resulting images therefore represent the actual ground surface rather than anything that might otherwise obstruct or conceal archaeological sites from view. This is particularly useful in areas of dense woodland or other vegetation, where archaeological sites might otherwise remain unidentified. Over 300 new sites were identified following the Baillie LiDAR survey, which covered an area of 85km2.

The most prominent archaeological features detected by the Baillie survey relate to settlement and agriculture; in numerous areas, the survey has allowed the identification of a palimpsest of agriculture and settlement, where medieval and later rig-and-furrow systems overlie much earlier cairnfields, interspersed with the fragmentary remains of 3000 year old hut-circles and associated enclosures. Good examples of this can be seen at West Shebster and particularly at Broubster, where the prehistoric landscape can be seen beneath the more substantial remains of post-medieval long-houses and enclosures. The ability of LiDAR to rapidly capture the archaeology of an entire landscape is unprecedented, and heralds a new era in the survey of well-preserved areas like the uplands of Caithness.

Of the 300 new features identified in the Baillie survey, the majority was found in upland peat and moorland, with the western slopes around Loch Calder, Broubster and Shebster being particularly fruitful. The full extent of Caithness' Bronze Age settlement record is made apparent in these areas, and over 60 newly-identified ring-banks, probable hut-circles, were identified during this survey. The newly-identified sites were not exclusively located on relict ground, however, with several very denuded examples found in improved pasture in the low-lying ground near Dounreay. The ability of the technique to identify very slight features has furthermore allowed the identification of some sites of uncertain character, while the range in form and size of the many enclosures detected across the surveyed area requires further field investigation to clarify their chronological origins.

None of the Baillie Hill LiDAR survey sites have been verified through ground observation, and one of the consequences of the acquisition of such large quantities of data is the associated research that is required to analyse, categorise and sort the results. Initial work in ground verification of LiDAR-identified sites has been undertaken at the Burn of Whilk windfarm, near Yarrows, where walkover survey and trial excavation at a number of features identified by LiDAR survey has confirmed their archaeological character.

The Yarrows landscape is a particularly well-surveyed area, having been the focus of attention of antiquarians from Shearer and Rhind's work in the nineteenth century, through to modern field survey carried out by the RCAHMS in 2004. Despite being so well known, however, the LiDAR survey of Yarrows has been able to add several hut-circles, burnt mounds, medieval and post-medieval buildings to the list of known sites in the area, and has proven to be of invaluable assistance in mapping the extents of historic agriculture in the area. Particularly striking is the effect of peat cutting in the uplands of Yarrows and Warehouse, visible as a series of inter-cutting scars across the landscape in the LiDAR data.

This wealth of information deriving from the new surveys will be put to a range of applications. Firstly, the newly identified sites have been catalogued and submitted for archive with the Highland Councils historic environment record, and will provide an invaluable management tool for future research and management of the archaeology of Caithness. In addition, however, the data will soon be made freely available to browse and interrogate online, providing a research tool for the public and academics alike to investigate the archaeology of Caithness. By making the results of the survey available to the local community and heritage groups in Caithness, it is intended that these cutting-edge techniques can form the basis for future community projects, offering the opportunity for participants from all sectors to engage with the study of their past.

This accurate and sophisticated method of recording archaeological sites using LiDAR and wider landscapes looks likely to continue to gain pace and popularity, and increased use of the technique will enable the reanalysis of large areas of Highland Scotland, and is likely to lead to the identification of many more monuments. The datasets collected in Caithness will prove invaluable to research in the future, and are an unparalleled means of preserving the landscape of 21st century Caithness by record. As the first survey of its kind undertaken for archaeological research in Scotland, Caithness is currently at centre stage in the future of heritage survey in Scotland.

See also -
http://www.aocarchaeology.com/news/BaillieLiDAR
Photo aside is from this web site and not included in the original article in the Field Club bulletin.