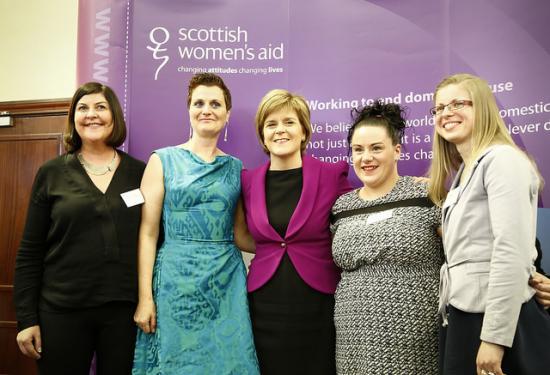 Proposals to help victims of Domestic Abuse and Sexual offences have been announced in a consultation by First Minister Nicola Sturgeon today.

Speaking at the Scottish Women's Aid conference in Edinburgh, the First Minister confirmed that the consultation would seek views on how legislation can be used to better support victims of Domestic Abuse and Sexual offences.

The First Minister told the delegates that the Scottish Government was committed to tackling all forms of violence against women and to the realization of women's equality in our society. She said:"Violence against women is both a symptom and a cause of wider gender inequality across our society. And so ending violence against women has to be part of a broader strategy - we also need to achieve true gender equality in society as a whole.
“And of course, that’s exactly what this Government is trying to do. Appointing a gender balanced cabinet; campaigning for gender equality in the boardroom; expanding childcare; and addressing gender stereotypes. We’re working to create an economy and a society where discrimination has no place. There is still a great deal to do, but this government is determined to take a lead.

Urging the delegates to take part in the consultation the First Minister said:“We are launching a far reaching consultation today on whether the current law on domestic abuse and sexual offences should be clarified and strengthened. I strongly encourage you to respond; the deadline is the 19th of June 2015.

“Domestic abuse in law can be challenging therefore we need to ensure that our legislation commands wide support, anticipates possible pitfalls, and allows us to prosecute the people who perpetrate these crimes. “If there is a consensus on what we need to do, we will legislate in this Parliament. But if we need to do further work with stakeholders to ensure we get this absolutely right, we will do so.

“Either way, we will make clear that on-going coercive and controlling behaviour is unacceptable; and that those who commit such crimes will face justice. We know that changing the law isn’t enough on its own - but it can play an important part in the wider social and cultural changes we want to bring about."

Lily Greenan, Scottish Womens Aid, Chief Executive, said:“It is 20 years since the Beijing Platform for Action laid out the work that should be undertaken globally to improve and protect women's human rights. The Platform for Action identified violence against women as one of the critical areas of concern. We are delighted that the UN Special Rapporteur on Violence Against Women is able to join us in reviewing the progress we have made in Scotland since 1995 to tackle violence against women.
“Equal participation of women and men in decision making was also one of the goals of the Beijing declaration. It's a particular pleasure therefore to welcome First Minister Nicola Sturgeon to the conference.

“Ms Sturgeon's appointment demonstrates that some progress has been made on gender equality in the last 20 years. The conference will hear from frontline Women's Aid workers how far this progress is reflected in the experiences of the women and children they.” support."