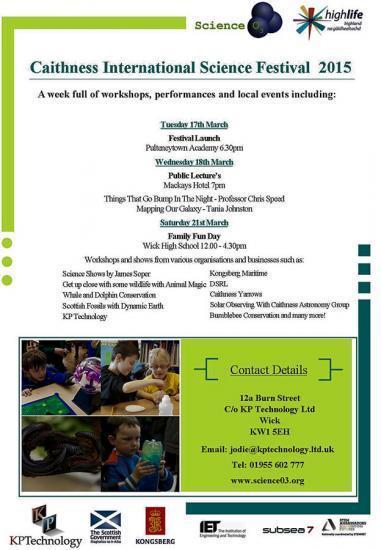 The 2015 Festival will get off to a flying start with a busy evening of shows, workshops and prizegiving at the Festival Launch at Pulteneytown Academy School 6,30pm. Introductory addresses by Professor Iain Baikie, Councillor Gail Ross and Lord-Lieutenant Anne Dunnett. This is where the pupils that won the design competition will be awarded their prizes that
were kindly donated by Kongsberg Maritime Ltd. There will be shows by the science presenters who are visiting local schools during the week.

Including James Soper's "Juiced" high voltage electricity show, and a new show from "Animal Magic". There will be hands-on activities to drop-in and try, including: the Bloodhound Supersonic Car project's stand and balloon car challenge; the IET's magnet, motor and generator table-top demonstrations.

On Wednesday 18th March 2015 at the Mackays Hotel Wick there will be two public lectures with the first starting at 7pm, an intermission at 7.45pm for some refreshments and the second lecture taking place just after 8pm.

Details of both lectures are as follows.

Things That Go Bump In The Night
Professor Chris Speed, Edinburgh University Chris Speed will speculate on a future in which objects begin to interact with us in different ways - as parts of an Internet Of Things. A ubiquitous form of computing is anticipated, in which every device is on, and every physical object is connected in some way, to the Internet. Case studies from design research projects will include objects that hold memories for us, tools for transport research, and a smart toilet roll holder that acts as a burglar alarm!

Mapping Our Galaxies
Tania Johnston, Royal Observatory, Edinburgh Tania will focus on the European Space Agency telescope, and how to find
the highlights of the night skies. Anticipating the partial solar eclipse, visible from the UK on the morning of Friday 20 March 2015.

Finally on Saturday 21st March 2015 at the new venue of WICK HIGH SCHOOL we will be hosting a Science Family Fun Day which will start at 12 noon and finish around 4.30pm.

Local schools will also be taking part in the Science Olympics which will be on show to the public.

James Soper will be attending the Family Fun Day again this year with "The REAL Science of the Circus" show that will be offered at various times through out the day.

Cancellation of All of Caithness International Science Festival Events

Unfortunately the Science Festival organisers have received the latest news from the Highland council in face of the evolving Coronavirus crisis.   "In line with national guidance, the Council has moved from containment to delay.
[Community Groups]
3/3/2020 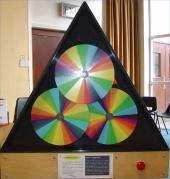 The Caithness Science Festival 2018 is still going strong in its sixteenth year.   The official launch was on Tuesday this week with events running every day.