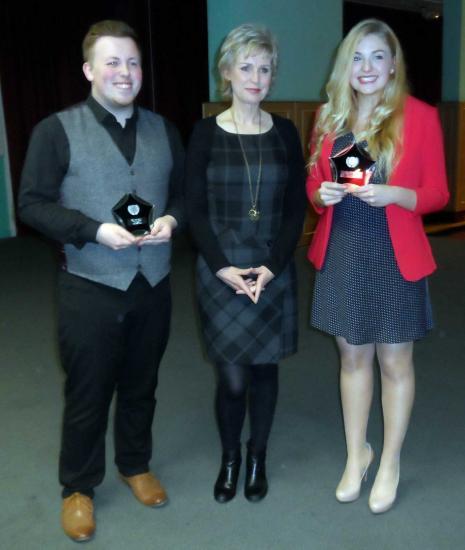 In what was undoubtedly a first for Wick High school Murray Watts, script writer and director in the film industry compered an evening of short films and Oscar awards.

The Oscars were the culmination of project that Murray Watts has started in schools that hopefully will spread around the UK using friendship as the theme with many practical outcomes for those engaged in it. The Friendship project has been running for a year in the school and developed in the art and techy sides of the school. The project has brought together many different aspects of school life but taking an over view of how friendships can impact on everyone's life and the impact they might make on many different levels.

Combining many threads of science, film making and art the short films showed the skills gained in animation with short examples using computer controlled equipment and through to the many skills needed to create and make short films. This process was assisted by Murray Watts' two sons Toby and Fionn Watts who were ex pupils of wick High school. Using the experience they have already gained though their own production company 'Far North Film' they helped bring out the talents of the pupils involved in both production and acting.

The audience were able to see the short films that had a variety of messages and looked at Friendship in a range of situations using the school as the backdrop.

The Oscars were the finale to the years work and some of the stars were heading off to pastures new in their education.

Awards were made for a number of categories including best film, screenplay and of course best actor and actress.

The top awards for acting went to Sean MacGregor for Best Actor & Abigail Jolly Best Actress. Both said the project had been one of the top features of their last year at school.

Some of the other award winners were there to pick up their trophies and certificates.