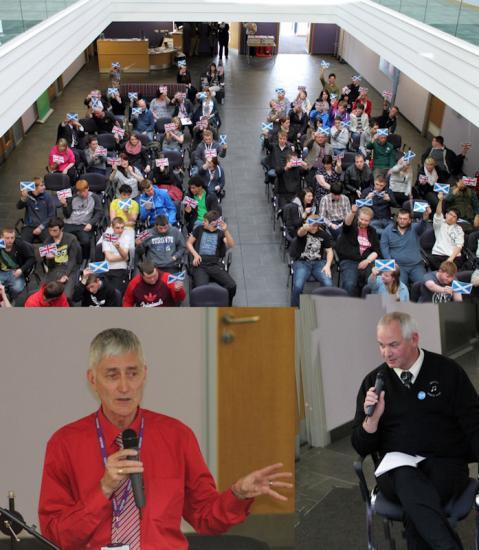 Last week 120 students and staff at North Highland College UHI attended an in-house Independence Referendum debate "Aye or Nae". The event was organised by members within the college to better inform students and staff for their vote in September. In preparation for the debate the College encouraged students to go along to pre-debate workshops where they would work on questions for the debate.

Both Yes Scotland and Better Together were approached by the College at the same time to request speakers.

Looking forward to a good debate was Brian Dodds, Board Member at the North Highland College UHI and event compere. Set up in ETEC, the event was supported with a PA system, video recorder and video-link for external campuses as well as live social media updates. Certificate in Computing & Digital Technology student Dylan Cameron volunteered to take photos during the event. The audience were supplied with flags of Scotland and Britain to demonstrate their vote before the debate which showed a split audience pre debate. The representatives were allocated 20 minutes each to present to the audience and with the luck of a coin flip, "Aye" were to start the debate.

“Ladies and Gentleman - Scotland is one of the world's wealthiest countries. We are rich in human talent and rich in natural resources.” Raymond opened the debate discussing Scotland's wealth and complimented the world-class industries that it homes. He said that Scotland is rich in the food, drink, whiskey and tourism industries with an estimated 98.9% of predicted oil in the UK.

Raymond then stated that he is aware that charities have recently estimated that there will beup to 100,000 more children will be in poverty as a result of changes to social security being made by the current UK government. He encouraged the audience that this would not be the case in an independent Scotland while he reiterated the importance of voting in September. Following this Raymond went on to mention that the UK has become one of them most unequal societies in the developed world and from his point of view this is due to decisions being made for Scotland in Westminster.

Taking his 20 minutes, Roger Saxon for Better Together reinforced how important the vote on the 18th September is to everyone and how it is “a one-way ticket, no going back, no refunds.” Roger took the audience through the importance of the pound to the UK and in particular how it is one of the most trusted and secured currencies in the world. He stressed the implications if Scotland was independent resulting in the pound being shared could end up in a situation like Greece which in the latter had to cut health and social welfare.

Roger continued on “Today, and for the last 15 years we have had a Scottish devolved parliament already in control of the NHS, education (schools, colleges and universities) transport, police and justice, the environment and economic development.” Roger said that Scotland does have power when decisions are being made and independence is not the best answer for Scotland. Roger finished with devolution. From the Labour councillor point of view “devolution means we keep the best of both worlds.”

The North Highland College UHI provided live updates through social media and encouraged students to send their messages, which proved very useful for the Alness Campus who joined by video link. Compere, Brian Dodds went into the audience for the question and answer session and students were keen to find out about free prescriptions and bedroom tax amongst other things.

With regards to bedroom tax, Raymond stated in his 20 minute presentation that in an independent Scotland bedroom tax would exist only if Scotland voted it in. Better together spoke out that there is already a Scottish government in place when these decisions were made.

The future of university fees, a question which could affect many within the College was asked of the debaters. Raymond said that he had hoped that university education would continue to remain free for students. The same questions went to Roger, where he stated that 13% of UK funding is for universities and said that it would be up to Universities Scotland.
The results were counted at the end; “Aye” received a total of 49 votes with Nae coming in at 42 and 29 attendees choosing not to vote. Following the event many staff and students within the college have continued their debates with each other. The North Highland College UHI holds information on both Better Together and Yes Scotland in the library for both staff and students reference.

Commenting on the event, Roger said “It was really important that you held this event, particularly for those who are first-time voters in this crucial referendum, giving them the opportunity to ask the questions that matter to them. The closeness of the vote shows how important our decision is and I hope the students turn out on the day; better yet, get a postal vote to make sure of it, in case they are working or studying away from home on the 18th September.”