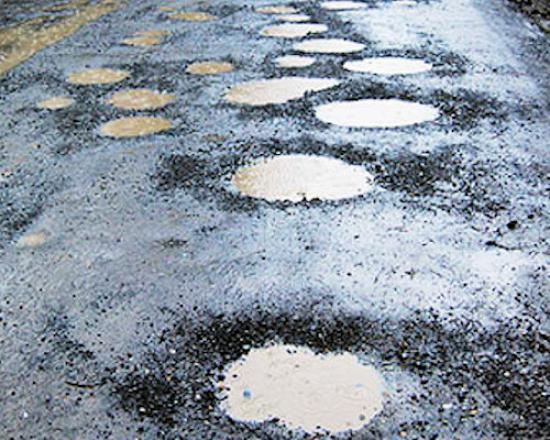 Everyone is aware that roads in the UK are deteriorating due to lack of spending on them. This affects all drivers as damage to vehicles from potholes is known to be huge and although claims can be made against the local authority or the trunk roads authority this does help with all the inconvenience whilst cars, vans or trucks are off the road for repairs.

Reporting potholes by the general public does at least mean that a particular problem gets on to the list of potholes to be repaired and often short-term repair is carried out very quickly after a report is lodged and that at least helps all motorists.

An article from the Guardian -
http://www.theguardian.com/money/2013/mar/09/pothole-trouble-make-local-authorities-pay

Trunk Roads
These main roads are the reposibilty of Transport Scotland and not the local authority. They have contracted companies who carry out the works and to whom any faults can be reported.
Bear Scotland
http://nw.bearscot.com/
North West Region includes Caithness and Sutherland

Potholes.co.uk
This web site has every thing you need to know about potholes.
www.potholes.co.uk

FixMyStreet
Another web site for reporting potholes any place in the UK
http://www.fixmystreet.com

RAC
Advice on potholes on the RAC web site
www.rac.co.uk/advice/potholes/

Roads in Highland are now dealt with under the recently formed Community Services committee that replaces the TEC Technical Services committee.
the most recent meeeting took place on 15th May 2014and a videocast can be seen at -
http://www.highland.public-i.tv/core/portal/webcast_interactive/117584
A paper on roads maintenance was discussed. To find that part of the debate click to Item 8 in the agenda on the right side.