A golden toast for fifty years of parties 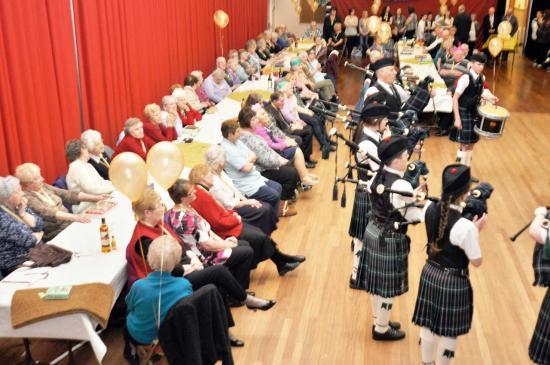 WICK works weil and nowhere is the royal burgh’s motto more appropriate than in the annual treat it stages for its pensioners.

Come, hail rain or shine the organising committee and its army of volunteers, backed by the community, always lay on a special night for its ain folk. This year’s bash was, of course even more memorable as the event was celebrating its golden anniversary at its regular venue, the Assembly Rooms.

About 130 pensioners sat down to a meal in the hall suitably decorated for the occasion. Among the special guests were the Lord Lieutenant Anne Dunnett whose father Willie Dunnett was the town’s provost when Councillor Gibby Fraser – his wife Jean was present at 50th anniversary - mooted the treat for Wick’s elderly in 1964 as a boost in what is the flat month of January after the buzz of the festive season. Another councillor Bill Mowat – he later became provost – headed up the organisation for the inaugural party. A message from his family who were unable to attend was read by master of ceremonies Thomas Mackay.

The Mowat members described the 50th achievement as “amazing” and said they were certain their dad, and the town councillors involved would have been proud to know that “this special event is still going strong.” The message ended – “Have a wonderful night”. Also present were supporters of the party over the years and their families.

Following an excellent meal, presentations were made to the Harper family and the Wick RBLS Pipe Band for their musical imput since the party’s inception. The anniversary cake was cut by the longest married couple in the hall, David and Zena Ross. Music for the evening was again provided by the Addie Harper trio and the audience were treated to selections from some of his talented pupils. Highland dancers and the pipe band also featured ahead of dancing and to finish, Auld Lang Syne.

Each pensioner received a lasting souvenir of the golden anniversary...an inscribed medal, presented in the best of Olympic tradition by the Lord Lieutenant.

Pensioner Noel Donaldson, who was a party guest and covered last night’s event, commented: “I think the organisers and their volunteers are due a huge vote of thanks for a great night, and everyone involved in keeping it going over the years. Despite the difficult times, particularly in recent years, they and the community have always risen to the challenge and given their pensionsers a night to remember, in what is for many, a driech month.”

See all the photos from the night in the photo gallery - link at top left.