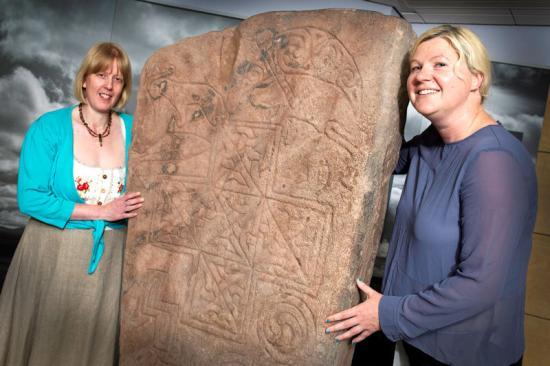 A new roof, Homecoming 2014 events, collection redisplays, enhanced security and marketing training and support are some of the benefits to come from Museums Galleries Scotland’s new Strategic Investment Fund. Nine projects will receive a share of over Ł300,000 with individual grants ranging from Ł17K to Ł40K.

Caithness Horizons receives Ł22,654 to develop an early medieval sculpture exhibition that will tell the story of early medieval Caithness, from a Pictish to a later Norse settlement. The exhibition will be the centrepiece of the museum’s Year of Ancient Ancestors Festival as part of the Scotland-wide Homecoming 2014 celebrations. Child friendly interpretation will be developed by local youths.

Beki Pope, Centre Manager of Caithness Horizons, said:
“The development of the new exhibition will enhance Caithness Horizons growing reputation as specialists in the interpretation of the Pictish and Norse heritage of the Far North of Scotland. We are delighted that Museums Galleries Scotland has been able to support his new initiative to showcase our important collection of Early Medieval Sculpture.”

Continuing the Homecoming theme, Highland Council will receive Ł40,000 to lead on a pioneering new collaborative approach to developing region wide events. The multi-partner project will deliver a wide range of Homecoming events that celebrate local culture and traditions across the Highlands and Moray.

Robert Burns Birthplace Museum (RBBM) receives Ł39,350 to work with a visual arts company to produce exhibitions by contemporary artists. The exhibitions will combine works for sale and reinterpretations of the RBBM collection. The biggest impact of the project will be the long term ability to reach new audiences and to raise supplementary income.

Douglas Connell, Chair of Museums Galleries Scotland said;
“With this first round of the Strategic Investment Fund we see the sector really getting its teeth into delivering the National strategy aims. We have excellent examples of cross sector collaboration, explorations into new ways of working and pursuing increased sustainability through additional revenue sources.”

“This is just the start of us seeing the National Strategy in practice. I encourage Scotland’s museums to get in touch with MGS to discuss how the investment streams can support you in delivering the strategy and your own organisational aspirations.”

Joanne Orr, Chief Executive Officer of Museums Galleries Scotland said;
“Scotland’s museums and galleries are a vital link to the past and offer new ways of thinking about our future. An encounter with an object, whether it is an ancient household utensil or a valuable jewel can really fire the imagination with questions like who used this and what was their life like? That’s a very powerful and humanising experience regardless of age. Consider your local museum like a time travelling machine for the mind and our funding supports them to continue their inspiring work within Scotland’s communities.”

Museums Galleries Scotland launched its revamped investment streams in January 2013. Changes included a simplified claims procedure with up to 25% funding paid up front to assist with project cash flow. An extended timeframe of up to two years allows more flexibility for museums in planning and delivering projects.

Museums Galleries Scotland is the national development body for museums and galleries in Scotland. MGS is an independent charitable trust.

All Accredited museums in Scotland are eligible to apply to MGS investment streams. The MGS Gateway Fund is a new fund to support development of standards and museum activity at organisations that are not currently Accredited.

Further details, guidance and application packs for all Museums Galleries Scotland’s Investment Streams are available from http://www.museumsgalleriesscotland.org.uk/funding/
Tickets are on sale for the MGS Conference, Fortune Favours the Brave, which takes place on 12 September 2013. Further information available from http://www.museumsgalleriesscotland.org.uk/skills-and-training/national-skills-development-programme/mgs-conference-2013/

National Trust for Scotland
Burn Bridges: New Perspectives on Robert Burns / Ł39,350
The MGS award will fund a new RBBM collaborative project with a visual arts company to produce exhibitions by contemporary artists. The exhibitions will combine works for sale and reinterpretations of the RBBM collection. The project will allow the museum to develop new audiences and to become more sustainable by attracting additional investment.

Glasgow Life
Peoples ‘s Palace redisplay/ Ł40,000
The People’s Palace is planning how to improve the visitor experience and this funding allows them to imaginatively display parts of their collection on the ground floor of the beautiful building to give visitors a taste of the history, objects and related stories in the museum and the local surroundings. Local community groups will help with creating new interpretation of the venue and objects.

Caithness Horizons
Early Medieval Sculpture Exhibition / Ł22,654
The MGS award will enable the museum to develop a new early medieval sculpture exhibition that tells the story of early medieval Caithness from native Pictish settlement to a later Norse settlement. The exhibition will centre around three recently acquired Early Medieval carved stones. Child friendly interpretation will be developed by members of the museum’s Young Curators Club. It will form part of the proposed "Year of Ancient Ancestors" festival for the Year of Homecoming 2014 celebrations.

Highland Council
Highland & Moray Museums and Heritage Partnership / Ł40,000
An exciting project that will result in a wide range of Homecoming 2014 events across the Highlands and Moray museums and venues. The events will celebrate local culture and traditions. It will make new connections between collections, sites and themes and it is anticipated that this will attract new audiences and volunteers. The project will pilot and review the use of an app and social media. It will also be a chance for staff and volunteers to develop. Project partners include High Life Highland, Highland Museums Forum, Moray Heritage Connections, Hi-Arts, National Trust for Scotland, Historic Scotland and 27 accredited museums.

Biggar Museum Trust
Special Exhibition Room / Ł40,000
Biggar Museum Trust are planning ahead with their imminent relocation by creating a special exhibition room in their new premises on Biggar High Street with the MGS award. The project will bring a lasting impact on the museum and the community engage the local community, up-skill their mostly volunteer workforce and increase visitor numbers.

Scottish Railway Preservation Society
Enhanced Site Security / Ł17,318
The MGS award will be used to secure the railway transport collections from the threat of metal theft – an issue which is also hampering their specialist conservation and restoration work being carried out by volunteers.

Old Haa Trust
Re-roofing of Old Haa / Ł30,848
Funding will allow for the building of a new roof that will safeguard the collections within and improve building insulation. At the same time they will strengthen the attic floor to create additional storage space for the collection.

Exhibitions Sue Jane Taylor “Beatrice Works” Exhibition Temporary Exhibition Gallery Until 22nd August The “Beatrice Works” exhibition is open until 22nd August so if you haven’t already been to see it make sure you don’t miss your chance! Thurso Gala: Children’s Art Competition Exhibition Cafe Throughout August Throughout August the Thurso Gala children’s art competition entries will be brightening up our Cafe walls.   Do come and have a look at the fantastic work that is on display.
[Village Halls]
13/5/2013