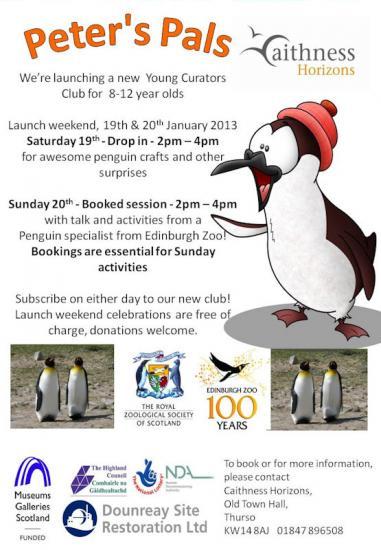 On 19th and 20th January Caithness Horizons will be launching a new initiative called "Peter's Pals" a Young Curators Club for children aged between 8 and 12 years old.

Led by “Peter” the Museum’s mascot who is a Little Penguin (scientific name: Eudyptula minor) and the Museum Curator “Peter’s Pal’s” will meet regularly (once a month apart from at Christmas and during the summer holidays) to investigate the Museum Collection; participate in workshops to learn new skills relating to the Museum’s Collection. Membership will be just Ł10 per year.

A special launch weekend for “Peter’s Pals” is planned for 19th and 20th January 2013. The 20th January just happens to be National Penguin Awareness Day!

From 2-4pm on Sunday 20th January Sandie Robb, Senior Education Officer from the Royal Zoological Society of Scotland at Edinburgh Zoo will be running the Zoo’s Penguin themed workshop at Caithness Horizons. Admission to the event is free but places are limited so pre-booking is essential.