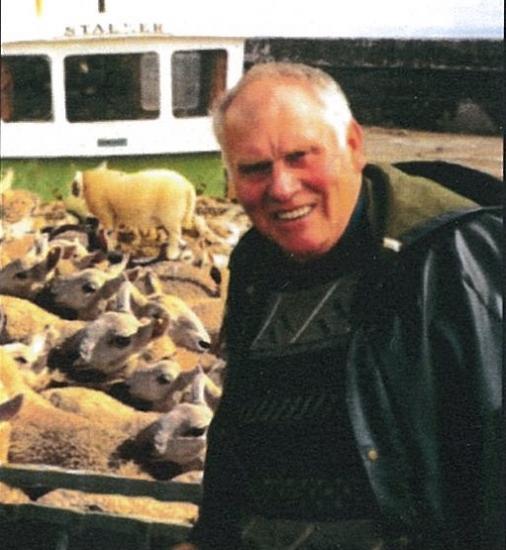 Jimmy Simpson, the Laird of Stroma, died at the age of 91 on June 2nd, 2019 at the Town & County Hospital, in Wick, Caithness, after a lengthy illness.

Mr Simpson, who was born at the fourth of a family of six in Stroma Mains Farm, had owned the now uninhabited island in the middle of the Pentland Firth since 1961.

He operated its near-one thousand usually wind-swept acres as a sheep-farm, servicing the two miles long by one mile broad island it with workboats based on little piers & harbours on the North Caithness coast.

Jimmy became best-known to visitors as the genial Stroma boatman, ferrying hundreds of visitors each summer to the isle just off John O'Groats.

Amongst those was the Duke of Rothesay who made several trips. Prince Charles painted fine water-colours of abandoned Stroma croft-houses, that he subsequently used as prints on personal Christmas cards. In the summer of 2017, Prince Charles made a personal visit to Jimmy's home at Burnside, Gills, Caithness, not long before he was admitted to Wick's 'elderly care' Town & County hospital, where he was a patient for a year before his death.

The narrow channel of the Pentland Firth's Inner Sound, that separates Stroma from the (Scottish) Mainland, is notable for its powerful sea-currents. The rapid twice-daily reversible tide-streams gushing through the often-turbulent waters between the Atlantic Ocean and the North Sea led to Norsemen naming Stroma ... literally 'stream isle' ... over a millennium ago.

When Jimmy was a youngster, the low green isle was home to a bustling mainly crofting-fishing community of around 200 people. Most of those made a living by catching cod on hand-lines from dory-size boats, called 'yoles'. The fish, said to have the firmest white flesh of any caught from British waters due to having to continuously swim in strong-current waters, were first bled, then salted, dried in the open and finally baled for export to Mediterranean lands.

The tide-swept waters around Stroma were also excellent lobster-grounds and Jimmy got to know the best sea-marks for catching those as a youngster.

Jimmy attended the island's primary school, and in 1939 two of his brothers, both reservists, were called up for Royal Navy wartime duties. With the entrance to the principal wartime Royal Naval base of Scapa Flow, Orkney, being only six miles distant, there was regular air-action in the skies over Stroma. Stroma lighthouse at its North end, was strafed by a German aircraft in 1941, the cannon-shells narrowly missing a keeper's young daughter playing in the yard. But six young islanders were killed died on WW II active service, something that may have hastened the rapid post-war depopulation.

Like most islanders, Jimmy gained an intimate knowledge from his early years of the Firth's tide-streams and their changing relationships with eddies, whirlpools and tide-races ... the latter locally known as roosts. This mattered when those streams were opposed by frequent strong breezes and gales blowing off Scotland's North Coast, giving rise to powerful, confused direction, large breaking waves.

As a genuine close-knit community, served by a Kirk, with a minister and manse, a school and nurse plus a Co-op shop, Jimmy was steeped in tales of rescues of ship-wrecked sailors by daring islanders in wild, often dark, winter conditions.

He also learned young about the exploits of the islesmen that served as daring Pentland Firth sea pilots in the days of windjammers. Those were modest, hardy, yet highly knowledgeable men who, for over two centuries, kept international trade flowing through the UK's second-busiest through shipping channel from NW Europe to the Americas and beyond.

Jimmy was also able to reel off the names of Stroma-men that had fought under Admiral Horatio Nelson at the Battle of Trafalgar; many had been press-ganged, as the Royal Navy's top brass were well aware of Stroma seamanship skills.

He was a toddler when modern-age 'manna from Heaven' landed on the Pentland Firth's shores in the form of the homeward-bound Danish steamer Pennsylvania, that grounded in calm seas in a thick 1931 summer fog, on jagged reefs off the neighbouring isle of Swona, just 2.5 miles away, with all on board saved.

In the depths of the 20th C's Great Depression, on their doorsteps here was a ship laden to the gunwales with a mixed cargo of American-made consumer and luxury goods.

Stroma boatmen, including Jimmy family, proceeded to 'liberate' her cargo, convinced that the ship could never be salvaged. Officialdom took a dim view of their activities, but Stromamen had the last laugh when they purchased the ship-wreck and its contents from the vessel's insurers, raising a tidy sum from the subsequent sale of goods salvaged before the badly-damaged ship, as predicted, broke up.

Tragedy came to the same spot only six years later with the wrecking, with 30 lives lost, when the brand-new Finnish motor-ship Johanna Thorden grounded in a fierce winter storm on her maiden voyage 'home' from America. It was the Firth's worst peacetime 20th C disaster.

In the immediate post-war, Jimmy moved with his family to a cottage at Tang Head, near Scarfskerry, a North coast village.

He bought an ex-Army truck and embarked on a career in road-haulage, specialising in livestock transport.

His real innovation was in establishing the first direct road service to Billingsgate Fish Market in London from the creeks of the Pentland Firth shores with loads of live lobster; there had been complaints about delays in rail services that had cost fishermen dearly.

In the early 1960s he sold the haulage business to a local family, whose Cormack Transport fleet of DAF articulated livestock trucks still ply Scotland's roads.

By then, he had become the 'unexpected' owner of his native isle.

By the late 1950s he was desperate to get rid of the isle whose population was by then declining rapidly, meaning loss of rent plus having to pay compensation to departing crofters for 'improvements' that they had carried out.

Jimmy was in Wick seeing his accountant when they discussed stories about the then laird allegedly in negotiation with a New York TV channel to have Stroma offered as the top prize in an American televised quiz show. The accountant suggested that he talk to a solicitor in the town, who was handling the 'local end' of the proposed sale.

Jimmy asked the price, did a few quick sums in his head, convinced himself that he could make a go if it ... and had signed a statement of his intended purchase before leaving lawyer's office.

Jimmy, a keen musician has played trumpet in a local dance-band, but guitar was his favoured instrument.

He played traditional acoustic folk tunes at fund-raising events in NE Caithness from the 1950s to 1980s.

He lobbied successfully for a slipway in the harbour at John O'Groats, while he made a practical suggestion that was incorporated in the re-building of Philips Harbour in Mey.

He laid on his family's work-boats for competitors in sea-angling contests and galas at Gills Harbour when the local Association there was re-organised to re-generate the little port.

And he lived long enough to become aware of the Inner Sound becoming the test-bed for demonstrating to the world that tidal streams, such as occur there, could be a valuable future source of renewable electricity not only locally, but nationally and internationally.

Jimmy was married to farmer's daughter Lena (nee Alexander) for almost 63 years. She survives him. He leaves a family of two; William, who runs the livestock business at Stroma; the family croft at Burnside, Gills and at nearby Freswick Mains and Mrs Christine Robertson, whose husband Gordon runs a local contracting & quarrying business nearby at Barrock, Caithness.

A packed Canisbay Kirk, the medieval-origin church close to the shores of the Inner Sound, heard the Rev. Lyall Rennie officiate at Jimmy Simpson's funeral service, the local Kirk Minister referring to the qualities that made him 'one of a kind'.