Launch of a new public artwork at John O'Groats 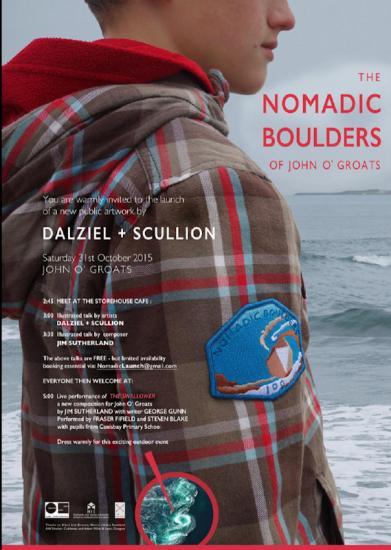 Pupils from a Caithness primary school teamed up with local creative people in preparation of the grand opening of a new sculpture at John O' Groats.

The sculpture which was installed Wednesday 7 October is named Nomadic Boulders and will be officially opened on Saturday 31 October.

Poet George Gunn and composer Jim Sutherland met with Canisbay Primary pupils where he taught them the poem, The Swelkie which they will recite at the grand opening. A swelkie is a tidal whirlpool which is associated with a mythical legend and the poem tells the story of how the sea was made salty.

Like much of George's work, The Swelkie connects people, culture, history and landscape of the North of Scotland.

Nomadic Boulders and The Swelkie are the latest in a series of temporary and permanent works by artists which have marked the transformation of John O’ Groats.

Highlands and Islands Enterprise (HIE) commissioned artists to ensure that the redevelopment, not only of the highest quality, but also reflected the unique qualities of the area.

Award winning artists Dalziel + Scullion were commissioned to create the focal point celebrating the natural occurrence of large boulders on the seabed of the Pentland Firth rolling backwards and forwards with the tides. Research shows that boulders on the seabed, which are among the fastest and strongest currents in the world, are regularly moved great distances.

The sculpture uses local boulders that appeared on a beach after a storm two years ago and will be suspended on three great arcs of bronze painted a rich pelagic colour.

George Gunn was accompanied by award-winning composer and artistic director Jim Sutherland, originally from Thurso who has composed a new piece of music for the grand opening. It will be performed by Steven Blake on bagpipes, and by Fraser Fifield, on saxophone.

The music will reflect not only the rich musical heritage of the area but also the daily sounds of maritime activity. Donna Swanson, community co-ordinator and performer also led workshops with the children.

Hilary Budge, from HIE, said: "We are very excited to give local school children an opportunity to work with such influential performers and we are delighted to be able to facilitate the creation of this imaginative artwork. John O’ Groats is a key destination for tourists as well as our local populations and we believe this piece of work, themed on the power of the Pentland Firth, will provide a fitting focal point to this magnificent site."

The artists have been working with local quarriers and contractors to bring this project forward and was manufactured at Black Isle Bronze foundry, Nairn.

This programme of artworks is funded by HIE and Creative Scotland Lottery fund.

Local people and visitors are invited to the unveiling of the new sculpture on Saturday 31 October at John O Groats.