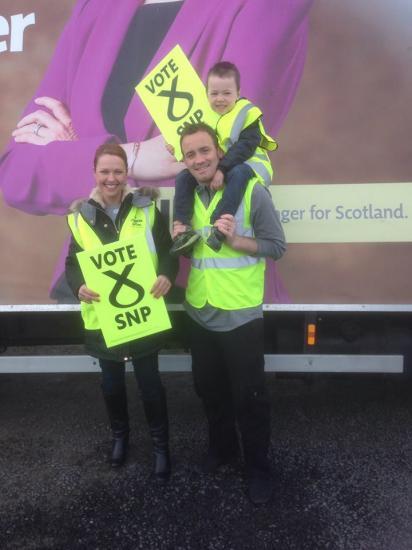 Wick councillor Gail Ross has announced her bid to be nominated by the Scottish National Party to represent Caithness, Sutherland and Ross following Rob Gibson who will stand down from next May. There will be other nominations up for selection and no doubt some seasoned campaigners for the SNP among them. But Gail is no slouch at campaigning. Apart from her tireless efforts for Wick and Caithness she has been attending many SNP meetings and made a speech to the full SNP conference in November 2014. Working for Rob Gibson in his office fielding many requests for help in recent years she is well versed in how things work in local and national government. She will put up a formidable campaign not only for nomination but ultimately to win the seat to represent the area at Holyrood.

Councillor Ross was elected in April 2011 in a bi-election to represent Wick on Highland council. She was re-elected again in the main election in May 2012 where she once again topped the polling.

"Just to let you all know I have written to all the branches in Caithness, Sutherland and Ross to seek their support for my nomination as the candidate for next year's Scottish Parliament election.
Now that Rob has announced his retirement I feel it's the right time to go public.
Building on my experience as a councillor I believe I am ready to make my contribution at a national level and I look forward to meeting many of you on our journey.
I would like to thank everyone that has encouraged and supported me so far, I hope I can repay your trust in the years to come."

Her council work includes -
Audit and Scrutiny Committee (Substitute)
Caithness and Sutherland Area Committee
Community Safety, Public Engagement and Equalities Committee
Education, Children and Adult Services Committee (Vice Chair) - This may change due the upheavals at Highland council in the press recently after the Liberal Democrat group walked out with no warning from the administration. A special council meeting has been called for Thursday 11 June 2015.

PHOTO
Councilor Gail Ross with her husband and young son.