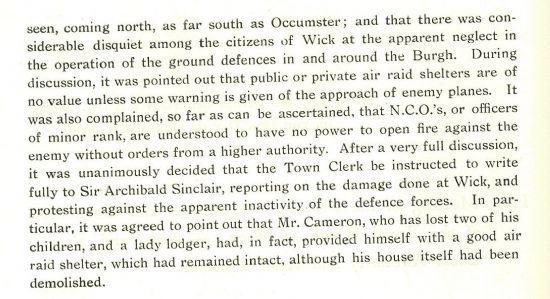 On Monday 28 October Italy invaded Greece from Albania, without consulting Germany first and much to Hitler’s annoyance. But faced with stubborn Greek resistance and poor weather the Italian forces failed to achieve a breakthrough. Meanwhile British convoy losses to U-boats continued to be heavy: a total of 63 merchant and other ships were sunk in October 1940. On 31 October all Jews living in Warsaw were moved to ghettos.
In Wick, all attention in the town was on dealing with the aftermath of the air raid of 26 Wick North School log book October. The log book of Wick North School recorded on Monday 28th: “Repercussion of a severe air raid on Wick on Saturday 26th Oct at 6.30 p.m. was felt in the attendance today, one third of the pupils being absent. The headmaster was personally involved as the bombs left his house in an uninhabitable condition. Two pupils belonging to the school died from injuries. This brings the total of deaths of pupils of the school in air raids to nine”.

In Wick Burgh Council, the main talking point was the lack of warning, and the Wick Burgh Meeting 28.10.1940 (1)“apparent inactivity of the defence forces”, especially considering that the raiders were seen coming from “as far south as Occumster”. The lack of warning was tragically highlighted by the fact that “MrWick Burgh Meeting 28.10.1940 (2) Cameron, who has lost two of his children, and a lady lodger, had, in fact, provided himself with a good air raid shelter, which had remained intact, although his house itself had been demolished.”

On 30 October Latheron police reported that a plane had crashed in Plane crash Latheron the parish. “An airman arrived at Boulester, Latheron, at 09.30 hours this morning and reported that his plane was down 5 miles due West of Boulester, in hill ground. The airman said he thought the other four occupants of the plane were dead. He himself was suffering from a broken shoulder… The plane struck a hill.”

Finally this week, some positive news: the Caithness County Fighter Fund, which had been set up some weeks before to raise enough money to pay for a Spitfire fighter,Caithness County Fighter Fund (John O' Groat Journal 01.11.1940) had reached and exceeded its target. The fund, which had set a target of Ł5,000, enough to pay for a fighter plane, had in fact reached Ł5,296 7s. 1d. The whole amount was to be remitted to the Minister for Aircraft Production.

Coming soon! Week 62, 4th - 10th November 1940, will be published on Monday 4th November 2013. To view previous issues please use the menus on the right hand side of the page.

For more illustrations, snippets and all the earlier weeks go to
www.highlandarchives.org.uk/caithness-at-war.asp